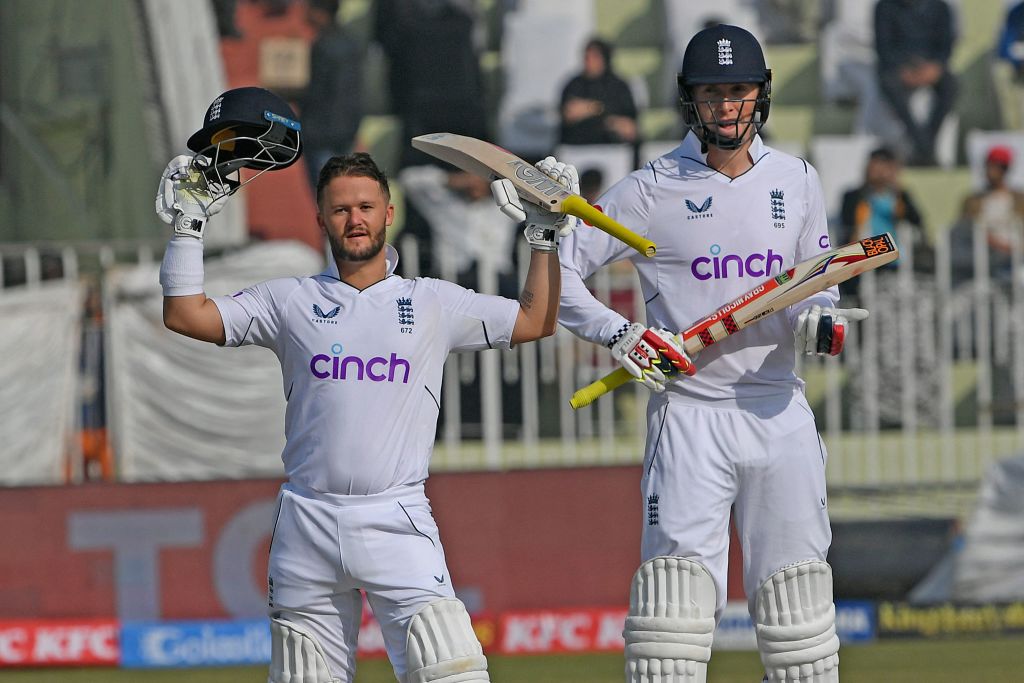 England’s Ben Duckett (L) celebrates after scoring a century (100 runs) next to his teammate Zak Crawley (R) during the first day of the first cricket Test match between Pakistan and England at the Rawalpindi Cricket Stadium, in Rawalpindi on December 1, 2022. (Photo by Aamir QURESHI / AFP) (Photo by AAMIR QURESHI/AFP via Getty Images)

Four of England’s top five batsmen smashed rapid hundreds against Pakistan in a record-breaking batting performance as the visitors racked up 506-4 on the opening day of the first test in Rawalpindi on Thursday (1).

It is the first time in test cricket that 500 runs have been scored on the first day, with England in dazzling form on their first test tour of Pakistan since 2005.

On a flat track and against a Pakistan attack that included three debutants, England’s batting looked like a continuation of their victorious campaign at the T20 World Cup in Australia.

Number three batsman Ollie Pope made 108 while Harry Brook, who was unbeaten on 101 off 81 balls, illustrated their approach best when he smashed six fours in an over from Saud Shakeel.

Captain Ben Stokes was batting on 34 when bad light stopped play, doubtless to the relief of the Pakistan camp.

“It was the ideal start to the tour,” Pope told Sky Sports explaining how the Crawley-Duckett partnership set the tone for their domination.

“It started from the get go – 14 from the first over. It put them under pressure and they looked like they panicked a little bit.

“It looked like there wasn’t anywhere they could bowl to those two. It was a perfect way for them to set us up for a series.”

Following Stokes’ decision to bat after winning the toss, Crawley gave an early indication of their intent, smashing three boundaries in the first over from Naseem Shah.

Crawley, on 99, got an lbw decision against him overturned and went on to smash an 86-ball century, the fastest by an English test opener.

Boundaries flowed from the other end too as Duckett, playing his first test in six years, brought up his maiden international century.

The eventful second session was more competitive though, with Zahid Mahmood and Haris Rauf picking up three wickets between them.

Crawley departed in the next over, bowled through the gate by Haris, after a sparkling knock which contained 21 fours.

Joe Root could not make the most of the docile pitch and fluffed a sweep shot against Zahid to depart for 23.

Pope fell after completing his third test hundred but there was no respite for Pakistan as Brook launched an extraordinary assault on Saud en route to an 80-ball hundred.

“They were all bad balls, so I tried to put them away really,” Brook said of that over. “I was probably happier with that than my 100 to be honest.”

England were forced to make a change to their original playing XI after several of their players were laid low by a virus that also threatened to delay the start of the match.

Will Jacks was brought in to replace stumper Ben Foakes, with Pope tasked with wicketkeeping duties.

England will also play tests in Multan and Karachi.