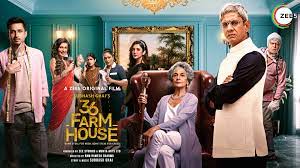 This film also marks Subhash Ghai’s digital debut as a storyteller and his debut as a music composer.

36 Farmhouse revolves around an interesting murder mystery that plays out with humour. At the core, it is a satire on the dichotomy between the rich and the poor with a universal theme ‘Some Steal For Need – Some Steal For Greed’.

The trailer shows how 3 kids try every possible trick to own their mother’s will and how the involvement of other eclectic, relatable characters around them adds extra fun to the story. The narrative reveals different shades of our society depicted in the story of a family.

Subhash Ghai, who has written the film and composed the music, said, “After a long gap, it felt like I was thrown into a pool suddenly and put to test on all my skills of film making once again with 36 Farmhouse – be it producing an entertaining film for an OTT for the first time; writing an interesting new story with an ensemble cast; seducing lyrics along with composing two songs for the film by myself or taking the best of performance from each actor and technicians through my writing and editing table. I enjoyed this experiment to the core and am looking forward to millions of people watching it come live on 21st Jan on ZEE5.”

Sanjay Mishra, who is playing the role of Jai Prakash, said, “36 Farmhouse is a unique family drama where all the characters can be easily found in every Indian family. It is highly relatable and can surely be enjoyed by all age groups. We’ve had a lot of fun while working on this film, and it will be great to see how the audience reacts to the trailer and eventually, the movie when it premieres on ZEE5 on 21st January.”

Amol Parashar, who is playing the role of Harry Prakash, said, “This has been an amazing opportunity for me, and I am grateful to Subhash Ghai sir for choosing me to play such a challenging character. It was a dream come true for me to work with such an incredible cast. Shooting for 36 Farmhouse was a lot of fun as well as an immense learning experience for me. I am certain that people will love this film and enjoy watching it with their family. Looking forward to the premiere.”

The film premieres on 21st January only on ZEE5.