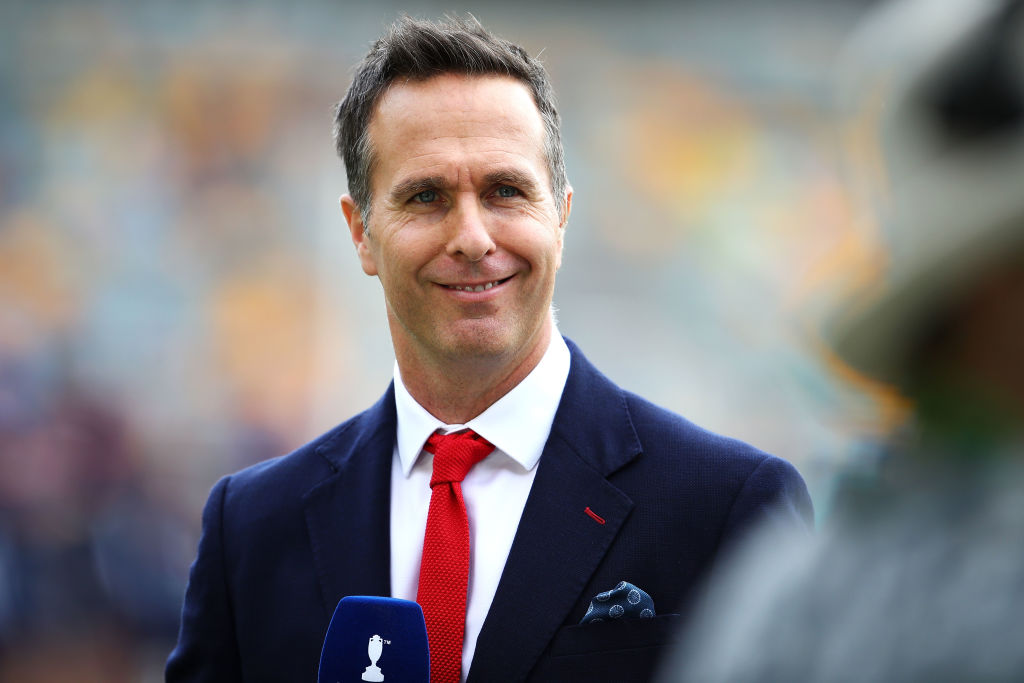 BRISBANE, AUSTRALIA – NOVEMBER 23: Michael Vaughan of the BBC commentary team laughs as he waits to speak on air before play on day one of the First Test Match of the 2017/18 Ashes Series between Australia and England at The Gabba on November 23, 2017 in Brisbane, Australia. (Photo by Mark Kolbe/Getty Images)

India has achieved absolutely “nothing” since winning the World Cup on home soil in 2011 and has been the most under-performing white-ball team in the history, former England skipper Michael Vaughan said on Friday (11).

Vaughan blamed team’s dated approach in white ball games for lack of performance following team’s ouster from the T20 World Cup. “India are the most under-performing white-ball team in history,” Vaughan wrote in his column for ‘The Telegraph’.

“Every player in the world who goes to the Indian Premier League says how it improves their game but what have India ever delivered? “Since winning the 50 over World Cup on home soil in 2011 what have they done? Nothing. India are playing a white-ball game that is dated and have done for years.” Despite having the prodigiously talented Rishabh Pant in the squad, India opted to go with veteran Dinesh Karthik in the first four Super 12 matches. They include the dashing left-hander in the last group match against Zimbabwe and then the semifinal.

But even in those two matches, Pant was under utilised as he came in to bat at No. 5 and No. 6 respectively with hardly any overs left.

Vaughan said he is baffled by India’s approach in the shortest format.

“How they have not maximised someone like Rishabh Pant is incredible. In this era, put him up the top to launch it,” he wrote.

“I’m just staggered by how they play T20 cricket for the talent they have. They have the players, but just do not have the right process in place. They have to go for it.” In the absence of pace spearhead Jasprit Bumarh and star all-rounder Ravindra Jadeja, the Indian bowlers cut a sorry figure while defending 169 against England as Alex Hales and Jos Buttler amassed 63 for 0 in the powerplay before achieving the target with four overs to spare.

“Why do they give the opposition bowlers the first five overs to bed in?,” wrote Vaughan.

“They have a left-armer in Arshdeep Singh who swings it back into the right-handers. So what do they do defending 168? They put on Bhuvneshwar Kumar bowling outswing to give Jos Buttler and Alex Hales width.

“Where is the left-arm seamer swinging it in to Buttler and Hales in the first over? “Madness. Cramp them for room. Do not give them a chance to get off to a flyer in the first over and settle nerves.” The 48-year-old also highlighted the lack of bowling options in the current Indian team and said the need of the hour is to have more batting all-rounders, a fact which spin legend Anil Kumble has also pointed out.

“How have they only got five bowling options when you think 10 or 15 years ago all of India’s top six could bowl a little bit – Sachin Tendulkar, Suresh Raina, Virender Sehwag and even Sourav Ganguly? “None of the batsmen bowl so the captain has only got five options. Their (India) bowling options are too few, they do not bat deep enough and lack spin tricks.” The team management’s decision to not play leg-spinner Yuzvendra Chahal throughout the tournament also cost India dear.

“We know in T20 cricket the stats tell you a team needs a spinner who can turn it both ways. India have plenty of leg-spinners. Where are they?” He also questioned India’s record in major ICC tournaments and feels they need to achieve more success to justify the skill level of their players.

“India are so important for world cricket but for all the advantages India have, they must win more. Even in their own backyard at the 2016 World T20 they did not reach the final. They were nowhere last year,” Vaughan wrote.

“This time it took an outrageous innings by Virat Kohli, probably the best in T20 of all time, to beat Pakistan in the group stages. They massively underachieve for their skill levels.”

Vaughan feels experts are scared to criticise India as they fear of losing work or getting “hammered” on social media.

“India have to be honest now. What happens when India arrive at a World Cup? Everyone plays them up.

“Nobody wants to criticise them because you get hammered on social media and pundits worry about losing work in India one day,” he wrote.