What Bollywood stars revealed in 2022 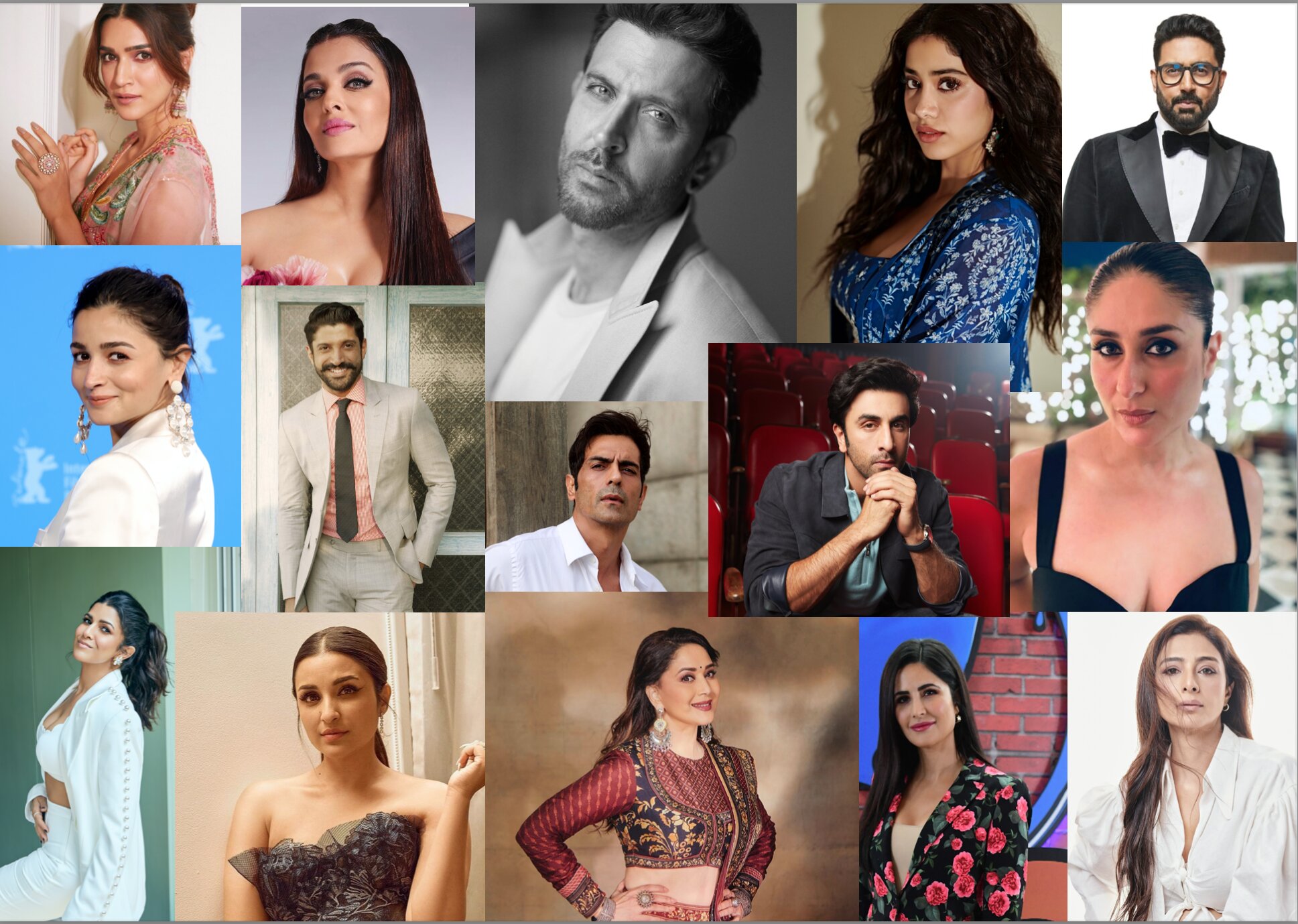 THE box-office figures may have been cold, but that didn’t stop it from being another year of hot revelations in Bollywood.

From future hopes and inspirations to dreams and secrets, there was a lot of things that popular stars shared about themselves. With that in mind, Eastern Eye put together a round-up of 50 things in Hindi cinema we learned in 2022.

During lockdown, Alia Bhatt did home auditions and self-taping for international projects, and despite finally landing a role in Hollywood film Heart Of Stone, she has no plans to leave Bollywood.

Filmmaking is now a bigger priority for Nandita Das than acting. Her third feature release as a director, Zwigato, premiered at the Toronto International Film Festival this year.

Despite receiving positive reviews for Rocketry: The Nambi Effect, actor R Madhavan has no plans to direct any more films.

Arjun Rampal is inspired by a wide variety of things. He said: “A great script and great talent inspires me. My children inspire and motivate me. Love motivates me. Waking up every day and having a sense of gratitude really motivates me to keep going.”

Tabu loves playing negative characters with shades of grey. She said: “As an actress, I want to do characters that are not just completely good or completely bad because a human being has so many layers to their personality.”

Pooja Hegde is a big believer in astrology and considers it a science.

The commercial success of a film is more important to actor and singer Dulquer Salmaan than critical acclaim. He said: “I think if box-office collections reflect a certain joy and love from the audience, that’s very important.”

Katrina Kaif wants to do something in the action space, but with an emotional angle. She also wants to act in a period piece.

The women who have played the biggest role in shaping actor Vijay Deverakonda are his maternal grandmother and mother.

Anu Aggarwal, a Bollywood star in the 1990s, is writing a book about her life and is planning a return to acting. She said: “As an actor, I never left. Acting for me is a karmic obligation.”

Shefali Shah had instantly agreed to act in web series Delhi Crime without reading the full script, and it is the project she is most proud of.

Ayushmann Khurrana wants to work on a horror comedy film.

Isha Koppikar added to the list of stars to come forward about the notorious Bollywood casting couch. She revealed that she was thrown out of a film after refusing to meet a leading man alone, so she could be in his “good books”

Kareena Kapoor Khan had a four-hour film narration and then auditioned before she landed a lead role in Laal Singh Chaddha opposite Aamir Khan.

Radhika Apte turns down sex comedies in Bollywood because they use derogatory language against women and objectify them.

Akshaye Khanna revealed that he was supposed to play the lead role in acclaimed 2007 film Taare Zameen Par, but Aamir Khan heard the story first and insisted on doing it. He added: “I don’t think I could have done a better job than Aamir. He was superb.”

Tiger Shroff has an ambition to be a cross-over action hero like Bruce Lee and Jackie Chan.

Parineeti Chopra opted out of acting in forthcoming film Animal opposite Ranbir Kapoor so she could star in director Imtiaz Ali’s biopic on late Punjabi folk singer Amar Singh Chamkila.

Legendary actress Asha Parekh won Indian cinema’s highest honour, the Dadasaheb Phalke Award, this year. She revealed that actors were afraid of her during her time as a leading lady, saying, “A lot of heroes would get frightened of me. I don’t know why. After some time, when we would talk, we would become friends.”

Hrithik Roshan revealed that the inspiration behind his superhero film Krrish was The Lord Of The Rings. He said his father, Rakesh Roshan, was inspired to make a sequel to Koi Mil Gaya after watching the fantasy trilogy.

Abhishek Bachchan revealed that whenever his famous family appear on the red carpet together, they hold hands and say a prayer first.

Huma Qureshi put on weight to play an oversized woman in Double XL, but was advised against signing the film. She explained: “My closest confidantes and companions told me that I was making a mistake. And it would be the end of my career.”

Varun Dhawan was diagnosed with vestibular hypofunction – when the balance part of the inner ear does not work properly – and it made him completely shut down.

After demanding dramatic roles, Shahid Kapoor is looking to do comedy again. He said: “I would love to do something easy and chill.” He also has no plans to direct and wants to focus on acting.

Madhuri Dixit said the Hindi film industry was very disorganised back in the 1990s, and she is grateful that things have changed today.

One of Aamir Khan’s all-time favourite movies is 2012 documentary Searching For Sugar Man. Among his own performances, he liked his character in Taare Zameen Par most.

Acclaimed actor Rajkummar Rao admitted that the most difficult roles of his career so far have been in the films Trapped and Omerta, along with drama series Bose, for varying reasons.

Tara Sutaria is a die-hard romantic and reckons she literally lives for love and adores love stories.

The person who worries most when Vidyut Jammwal does death-defying stunts is his mother. She prays on the days he is scheduled to do an action scene.

Kangana Ranaut wants to join politics if she is given the opportunity.

Sonakshi Sinha is greatly inspired by Kareena Kapoor Khan and Deepika Padukone. She also admires Alia Bhatt’s acting ability and describes her as one of the very best.

Janhvi Kapoor wants to act in a period film, comedy or love story, and said she will happily work in the West on a great project.

During lockdown, when he did not have a personal trainer in the gym, Shah Rukh Khan would look for workouts on Google. He also called Salman Khan, Hrithik Roshan and Tiger Shroff for exercise advice.

A dream role for Bhumi Pednekar would be to portray a freedom fighter on the big screen.

Ranbir Kapoor said the one thing he “tolerates” about wife Alia Bhatt is that she sleeps diagonally and takes up all the space in bed.

The best dating advice Ishaan Khatter got from his brother Shahid Kapoor was to not lose himself in a relationship and always know who he is.

Mahima Chaudhary had been secretly battling breast cancer during lockdown. She is now in remission and working again.

Ranveer Singh clearly is body confident. The actor did a nude photo-shoot that caused controversy.

The most extravagant gift Kriti Sanon bought herself was an expensive car.

Vicky Kaushal has a decent singing voice. Katrina Kaif revealed that her husband sometimes sings her to sleep.

Despite being a versatile actor, Pankaj Tripathi only likes doing Hindi projects because that is the language he is most comfortable in.

Farhan Akhtar played Waleed in TV series Ms Marvel and his favourite character from that superhero universe is Tony Stark.

Deepika Padukone described herself as a “spa junkie” and said she loves to get massages. The actress also meditates in her free time and is a big foodie who loves to eat.

Manoj Bajpayee was inspired to become an actor as a child after watching Amitabh Bachchan in classic 1973 film Zanjeer.

Akshay Kumar had auditioned for the role played by Deepak Tijori in cult 1992 film Jo Jeeta Wohi Sikander, but was rejected because director Mansoor Khan thought he was too wooden at the time.

Aishwarya Rai Bachchan is the confident one in her marriage. She takes the lead in public appearances and even orders room service food for husband Abhishek Bachchan because he
dislikes speaking to strangers on the telephone.