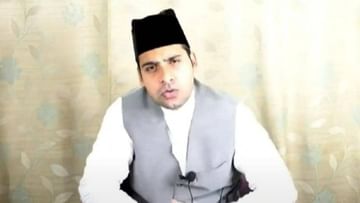 In a video, Syed Aadil Chishti is seen apologising for his remarks and said he was just conveying his opinion on suspended BJP leader Nupur Sharma’s comments. “My intention was not to target the Hindu religion or insult it, I was just answering Nupur Sharma’s questions,” he said referring to remarks made by suspended BJP Spokesperson Nupur Shamra whose comments on the Prophet had triggered an outrage.

“It is clearly written in the Quran that does not talk ill about people of other religions,” Chishti added in the video.
Syed Aadil Chishti also condemned the killing of Udaipur tailor Kanhaiya Lal and sought strict punishment for the perpetrators of the incident.

“There are some things in every religion that do not seem logical, however, we believe in them from a religious point of view. If my remarks hurt anybody’s feelings, I apologise for it,” he said.
Meanwhile, Vishva Hindu Parishad on Wednesday condemned the incident and demanded the Rajasthan government arrest him immediately.

Speaking to ANI, VHP Joint General Secretary Surendra Jain said, “The whole world is aware of the poisonous words of Chishti, due to which an atmosphere of hatred was created in the country and slogans were raised… and Kanhaiya was killed in Udaipur.”

“The kind of video released by his son Aadil Chishti in which he is seen mocking Hindu deities is highly objectionable and we will not accept it,” he said.

VHP leader Surendra Jain further told ANI, “Have people forgotten what civilization is all about? I demand the Rajasthan government that if you are really serious about the security of Hindus, then action should be taken against all these Chishtis of Ajmer Sharif and Aadil should be jailed along with his father Sarwar.”

“I also want to say that you should start learning good manners and not insult Hindus,” he said.