Want to use stronger word but dropping Kuldeep is unbelievable: Sunil Gavaskar 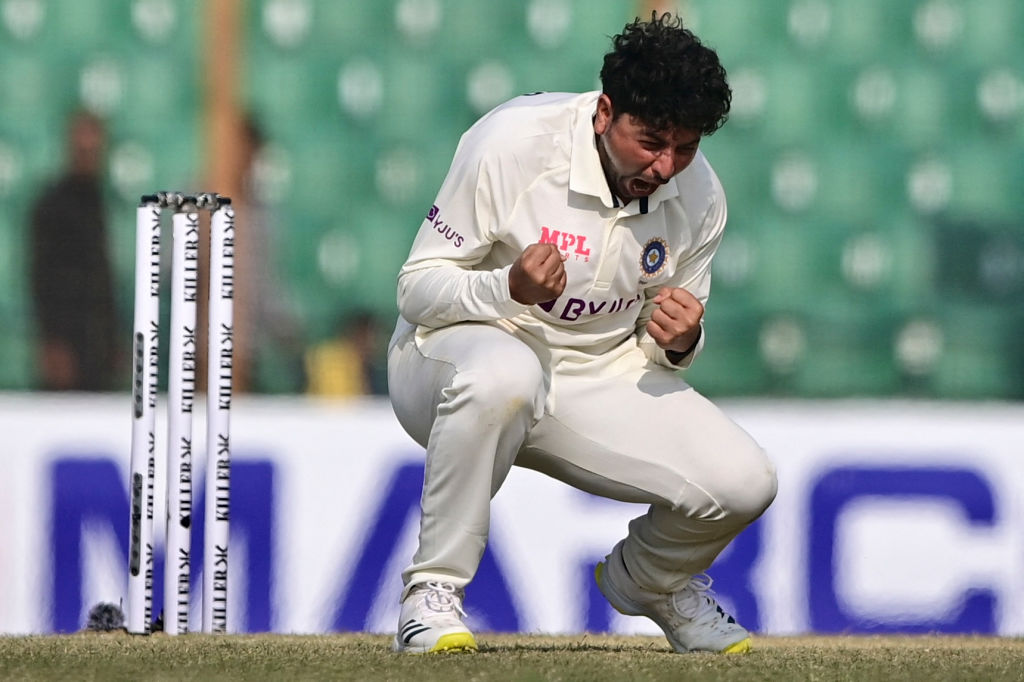 Indias Kuldeep Yadav reacts after the dismissal of Bangladesh’s Litton Das (not pictured) during the fourth day of the first cricket Test match between Bangladesh and India at the Zahur Ahmed Chowdhury Stadium in Chittagong on December 17, 2022. (Photo by Munir uz ZAMAN / AFP) (Photo by MUNIR UZ ZAMAN/AFP via Getty Images)

Spinner Kuldeep Yadav’s surprise exclusion from the playing XI in the second Test against Bangladesh drew strong criticism from the legendary Sunil Gavaskar, who has termed the axe after a stellar show in the series opener as “unbelievable”.

The 28-year-old left-arm wrist spinner had career-best figures of 5/40 in the first innings in the opening Test at Chattogram. He backed it up with three wickets in the second innings for career-best match figures of 8/113 as India defeated Bangladesh by 188 runs.

However, he was replaced by Saurashtra seam bowler Jaydev Unadkat in the second Test, which got underway at Mirpur on Thursday, making Gavaskar, former Test bowler Dodda Ganesh and former women’s captain Anjum Chopra wonder why the team management had taken such a decision.

“Dropping a Man of the Match, is unbelievable. That’s the only word I can use and it’s a gentle word. I would like to use quite stronger words, but it’s unbelievable that you left out a ‘man of the match’, who got eight out of the 20 wickets,” Gavaskar said while commentating on Sony Sports Network, the broadcasters of the series.

“You have got two other spinners (Axar Patel and R. Ashwin). So surely, one of the other spinners could have been dropped. But this guy, who took eight wickets should have played today with due respect to what the pitch looks like,” Gavaskar said, countering skipper KL Rahul’s argument that the 22-yard strip looked “confusing”.

Ganesh wondered why such treatment was being meted out to Kuldeep. “Why does this happen so often to Kuldeep Yadav? You can’t be doing this to him again and again. Please someone put an arm around his shoulder and tell him not to lose heart. Yes. It’s tough being Kuldeep Yadav. Spare a thought for him,” said Ganesh, who played four Tests, on social media.

“Also the way the Bangladeshis struggled to pick him in the last Test makes this decision to leave him out today even more senseless and defies cricketing logic. You want your match-winner to warm the benches?” he questioned.

“I guess the think tank needs to be a bit more considerate while dealing with the youngsters who’ve done well; and tinker the team combo accordingly. Last time they dropped Karun (Nair) after his 303 not out to play an extra seamer at Hyderabad. And now this, with Kuldeep Yadav. Shocking. Ridiculous,” he added.

Kuldeep had also contributed with the bat in the match, scoring 40 runs in the first innings. He had been included in India’s squad for the third One-day International against Bangladesh after fast bowlers Kuldeep Sen and Deepak Chahar had been ruled out due to injuries.

“Man of the match in India’s last Test victory just 3 days ago, Kuldeep Yadav makes way for Jaydev Unadkat as a third seamer for India. Strange but a tactical change,” wrote Anjum on social media.

In an earlier tweet after India had won the Test at Chattogram, Anjum had also praised Kuldeep’s batting. “1136 runs scored and more could have been in the conditions here at Chattogram. For Kuldeep Yadav to bag eight wickets in the match is very impressive.”