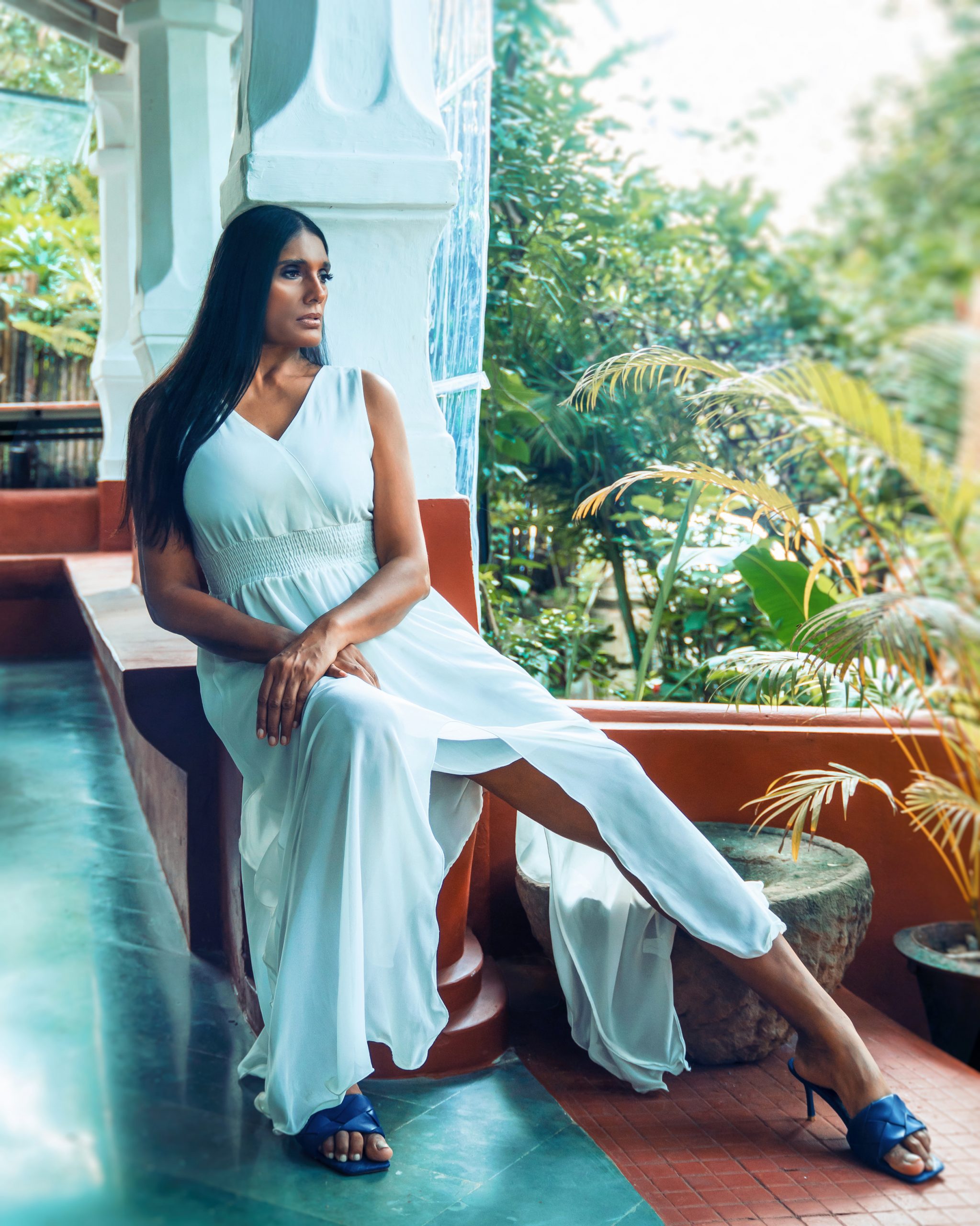 ACTRESS ON ABANDONING FAME, HER HORRIFIC CRASH AND SPIRITUAL REBIRTH

Instead of getting swallowed up in the stardom bubble generated by the smash-hit musical romance, she did the unthinkable and walked away from the lucrative entertainment industry after just a handful of films. She even rejected a major Hollywood offer. She then got certified as a yoga teacher from a top international yoga university, situated along the Ganges in India, where she followed a humble lifestyle, wearing simple clothes.

Just as she was about to start a transformative new chapter as a yogini, the gifted actress had a horrific car accident that put her in a coma for 29 days. An out-of-body experience and the trauma of nearly losing her life saw her become a monk, yoga master, and motivational speaker. She also helped those in need, along with finding inner peace on her enlightened path. Now after decades away, the 53-year-old is ready to return to acting. She has lost none of her star presence or fearless approach.

Eastern Eye caught up with the beauty to discuss her unique life journey, return to acting, inspirations, the healing power of yoga, and future hopes. She also gave advice to those who are going through tough times and had some strong opinions about the entertainment industry.

How would you sum up your rollercoaster life?

It has been magical, challenging, unbelievable, influential, and innovative. This life has also been inspirational, iconic, transformational, transcendent, and a spiritual awakening. I see my life as an endless journey in which there are many lives lived in one. Gratitude is what I have learned and am thankful for this incredible journey, which is a continuous and seamless flow of energy.

What gives you the greatest joy today?

I learned that we humans, at the cellular level, are hardwired for compassion and that made me understand why caring for others brings me the greatest joy. It needs to be done with kindness, empathy and caring for a bigger good than just your own. Anything that can bring greater long-term value and create positive transformation in people excites me. Self-love. Self-care.

How much has yoga helped you and what connected you to it?

I got my life back with yoga; it made me a dvija (twice born in one life). Yoga is not something that you do, it is who you really are — a united whole. I first learnt yogasanas when I was three years old in a class taught by my mother, who was certified in yoga and Ayurveda. Then when I was feeling traumatised with superstardom, yoga came to my rescue and fulfilled my ‘who am I’ quest. Later, yoga alternative therapy aided my holistic healing after the accident and that deathly whack.

How have you used yoga to help others?

Yoga is way more wholesome than just postures and breathing. Yoga believes in all problems to be psychosomatic, starting at the individual root level – preventive rather than curative. I follow this fundamental principle of yoga in the way I administer yogic healing to others. I have tried this in cancer patients and those in palliative care, with marvellous results. In fact, I have presented it in Germany at an international oncology conference, along with in other places. We are unaware about our own yoga-anatomy, which relies on deeper layers of consciousness in the body.

Tell us about your foundation?

I started work on poverty alleviation where we target the inner poverty people have, of greed, depression, anxiety, and mental ailments, among others. Mental health is a crucial topic we cover. Our mission is to raise inner joy to bring about peace. We specialise in mindfulness-based stress reduction, and maximising human potential in a systematic, ancient vedic-scientific way. In AnufunyogaTM, we fundamentally work on the mental health of people. Today, we have planted this seed of loving joy in over 245,000 people. We work with children to build compassionate leaders and create awareness of the untapped inner wealth that exists in each of us.

Would you have done anything differently during your acting career?

Not really. Like Eckhart Tolle, I too believe in the ‘power of now’. Regrets are for losers. From walking the ramp, to riches to renunciation and rejuvenation, I have had it full on. Then an avantgarde movie release in Cannes [film festival]marked the sabbatical I took from films. I lived my life dangerously and made some amazing decisions in my twenties. I respect that and think it leaves no room for correction. Yes, I made some mistakes, but both success and failure add to the spice of life.

How did the near fatal car accident change you?

My near fatal experience didn’t just change me, it revamped me. I left home one night and got smashed into a million pieces. Not only was my body fractured and paralysed, I had a brain bleed. I also lost the ego, which ironically is a great step towards achieving nirvana, moksha and enlightenment. So, in many ways, that accident turned out to be a blessing in disguise, however, traumatising it was. My brain dropped its operating frequency, so I have the mind of a 20-year-old with knowledge of the laws of nature and natural wisdom of the sages. Marvellous.

Tell us about the book you are writing about your experiences?

I have been writing personal diaries since I was 11 years old. Like Sylvia Plath, I am a confessional poet-writer, though I am quite the opposite from the alienation and self-destruction she had in her work. After the near fatal accident, doctors had resigned on my life. I miraculously self-healed and made the nearly impossible, possible. Through my second book, I want to bring hope and inner joy to people, in the dark climate of today.

Will you make a return to acting?

As an actor I never left. Acting for me is a karmic obligation. In the last two decades, I dared to live on a different plane of existence – that of a simple yogi-monk, marked by austerity. Intense stardom had traumatised me. I needed a spiritual rehabilitation. Right now, it’s an exciting time. I am opening up to the entertainment business and would love to act.

How did stardom traumatise you?

There was a lot of unwanted attention, which I didn’t ask for. This got fully exaggerated overnight when my first film made me a household name. The paparazzi would chase you and people would stand outside your building 24/7 to catch a glimpse of your car. It could have been a lot easier if my mother (like most Indian actresses have) or family was with me. I have been alone, but the good part is that it made me a self-made woman at a time when there were hardly any around in India.

Do you think ageism is a problem in Indian cinema for women?

Ageism, misogyny, and sexism are so deeply embedded in our culture that we never challenge them, instead, we embrace them. I feel Bollywood is a reflection of our society, and hence, for change to happen we – the people – need to grow up. In fact, ageism is a worldwide problem, due to which the botox-beauty cosmetic industry thrives.

How do you feel that your film Aashiqui is still so revered today. It has spawned a spiritual sequel and a part three is on the way?

I am thrilled to have been a part of an iconic and revolutionary movie that is still in demand. It feels a bit unreal that after three decades the film stood the passage of time. I feel absolutely fantastic and grateful that, as an actor, I got to work in some meaningful cinema in the short span of four to five years that I worked in the film industry. At the same time, the stupendous running of the popularity charts of Aashiqui fires me up, to bring striking work to the audience as an actor today.

What kind of acting projects are you looking for?

Basically, projects with well scripted stories, powerful directors, and strong female characters, who can give out a social message to those struggling and facing challenges in their day-to-day life. I have miraculously healed, so am open to ch­allenging and eye-opening roles for the greater public good. I have been acting since I was in the seventh grade and the life I have led is a mirror reflecting positive feminism and empowerment.

What has kept you emotionally and mentally strong during your most difficult days?
My spirituality of serve, love, and give. My belief of ‘do no harm’ and that ‘I am protected’. I learnt meditation right after Aashiqui. And in Buddhist meditation, I learned the five shilas of right conduct, which I have been following ever since – basically, no lying, no cheating, no sexual misconduct, no stealing, and following soft thinking. This has kept me well protected.

You are a motivational speaker also. What advice would you give those going through a difficult time?

Never give up as this moment is not here to stay. Meditate. Correct yourself instead of blaming the other. Be grateful for what you have. Be kind to others. You will be fine.

Would you say that you are fearless?

I am born fearless according to my mother. I haven’t done anything wrong, so why would I fear? Clear conscience is essential for anyone to be fearless. You can be too.

Apart from acting, what are your future plans?

I just want to continue to inspire people, raise awareness of mindfulness and how to practise it, and make others aware of some basic facts regarding their body and mind. I want to bring systematic changes for the betterment of humanity. I will continue to bring compassion through my writing, speaking, acting, social work, anufunyoga and have fun while doing it.

Creation and every creature inspire me. I get inspired by an ant trying to scud its way to the top of a hill, where each move is a challenge. When the unbelievable and impossible is possible, I get turned on. I act my inspiration.