The power of peace, prayers and finding common ground 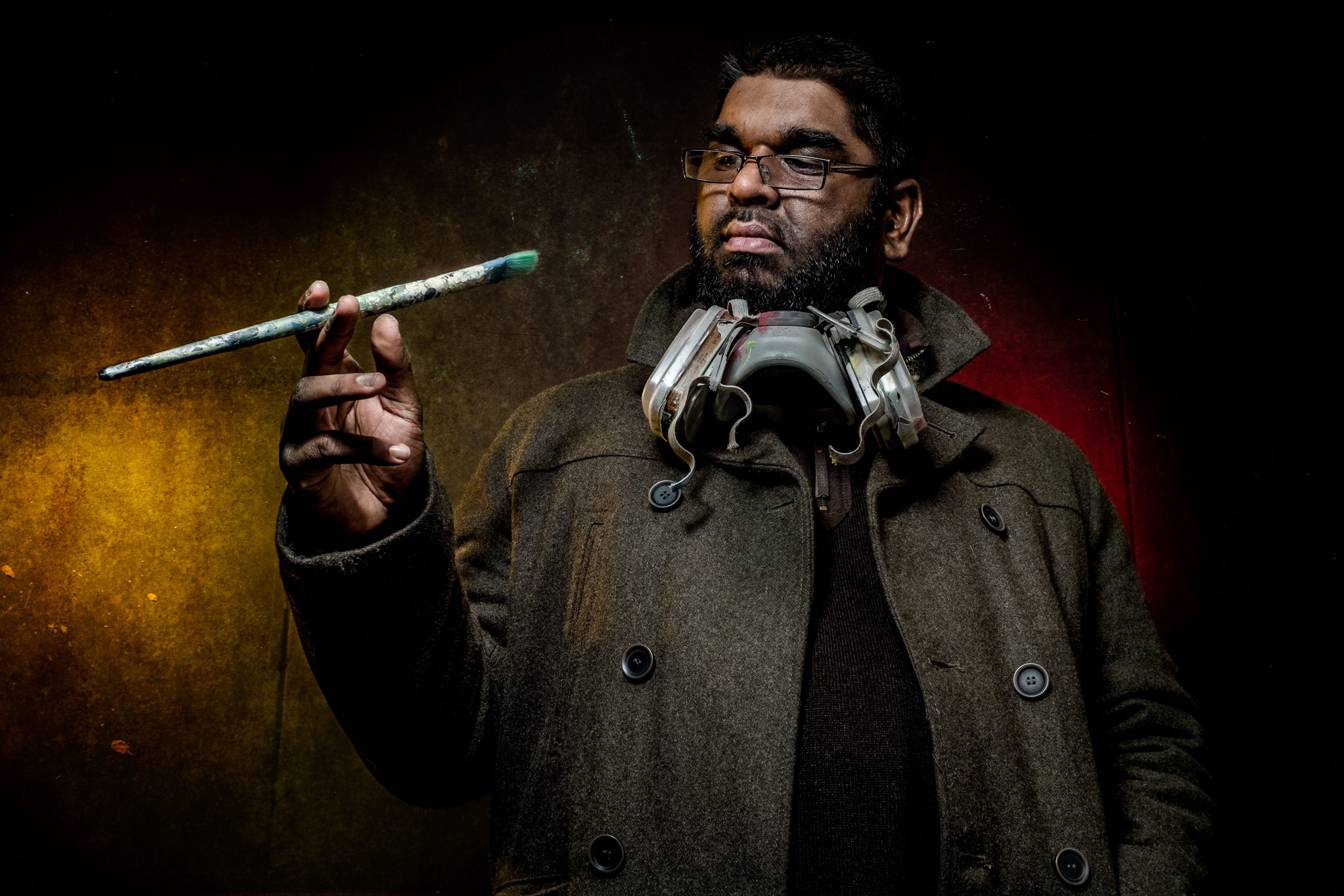 Having travelled the world from New York to Bangladesh, with his murals, performances, and installations, aw­a­rd winning street artist Mohammed Ali returns to his home city of Birmingh­am for a deeply meaningful new project.

His immersive theatrical experience Waswasa – Whispers in Prayer invites au­diences to walk through a combinati­on of live performance, art installation, and projected film zones. By disrupting the conventions of theatre, he places vie­w­ers at the heart of the story and demystifies the familiar yet misunderstood tradition of Islamic prayer. He also challe­n­g­es perceptions with the production, wh­­ich is being staged at Birmingham Hi­ppodrome from August 25–September 3.

Eastern Eye caught up with the British talent to discuss his creative journey, unique project, and the power of prayer.

What first connected you to creativity?
Even as a child, I’ve always been into art. Many Asian families would encourage their children to become doctors, lawyers, engineers, but I knew early on that I was destined for the creative sector. I’ve tried my best to shake it out of my system, but it never worked. Here I am. I’ve been working professionally in this sector for two decades now.

Which of your live projects has been closest to your heart?
While I refer to being in the arts as ‘working professionally’, it really is a personal passion. It’s how I express my feelings, be it my fears, loves, hopes, and dreams. While I have delivered a multitude of shows and exhibitions, when it comes to live projects Waswasa is the most ambitious. It really is the big one for me, as it’s such a heavy theme. It’s one I feel most
passionate about.

What inspired Waswasa – Whispers in Prayer?
About 25 years ago when I worked in my dad’s restaurant, we had regular customers that would come into the kitchen to say hello to the chef. They were entering into our world, beyond those kitchen doors. We had a lot of banter with them, so it was all very light-hearted fun. One time I remember vividly, when a regular called Andy saw our tandoori chef praying on his prayer mat next to the tandoori oven. He was bewildered upon seeing him prostrating on the floor. It led to a conversation about the action and motivations of prayer, and he was mesmerised by it.

Tell us more about that moment…
Our worlds collided at that point, and it struck me that we never get opportunities to have honest and thoughtful conversations about such things. Our differences as human beings are never dissected and explored. My father’s generation of early immigrants tried hard to blend in, instead of standing out and being themselves. So such exchanges were quite rare. I knew from that point that the prayer was so central to the immigrant narrative but so little explored beyond our own communities. I knew I had to expand beyond those boundaries and make it something that was demystified in a form that the likes of Andy, our regular customer, could comprehend.

Tell us about the show?
It’s a multi-disciplinary art show, which uses real-life community narratives, theatre, and a visual-art display in an immersive setting at the Birmingham Hippodrome theatre. For a few years now, I’ve been building this show that captures the experience of Islamic prayer and what that means in modern society. While the show takes place in a theatre, the audience will be walking through the space and seeing the art surround them.

What else can audiences expect?
They will then gather together onto an artificial lawn to experience the story told by a single actor. Film projections and specially-made musical soundscapes will surround them, as well as recitations and performances of Islamic prayer. We wanted to explore Islamic prayer in a form that’s never been seen before, including sharing the struggles and challenges of prayer in a secular society.

What inspired the title?
Waswasa is an Arabic word for devilish whispers that taunt you. While the show is generally uplifting, we wanted to explore some of the darker aspects too; how many may struggle with faith and focus. In fact, Waswasa relates to people of no faith as we all struggle with achieving that higher state of focus, with things like social media and technology dominating our lives.

What is the key message you want people to take away from this show?
Regardless of whether someone follows a particular religion or for those who don’t, we all at some point seek to find that place of focus, what some know as the ‘flow-state’, or more commonly referred to as simply ‘being in the zone’. That is common to us all. We try to take time out, whether it be through yoga, meditation, being creative or through ritualistic prayer in religion. We are all on similar pathways and Waswasa is to explore some of those parallels, including the struggles. When we explore the lesser obvious parallels in our lives, we can come together in more meaningful ways. This quest for dialogue and understanding is more crucial than ever in an increasingly polarised society.

Is there an element in the show that is your favourite?
While the narratives in this show are drawn from various real-life characters, there are also some deeply personal moments that relate to my own experiences. In particular, I explore the concept of death as being the biggest taboo in life. Having lost my mother to Covid a year and a half ago, there is a scene that delves into how we perceive death in society and how we often bury our head in the soil in reference to it.

How important are shows like this to promote understanding?
Often, we see approaches to dialogue and understanding in the realms of interfaith being not the most radical. They can often be presented in very cliché forms, and basically end up ‘preaching to the converted’. It is crucial that work around understanding different communities is cutting edge, challenging, and perhaps even uncomfortable for some. That type of approach doesn’t happen often enough, and I always encourage those in this area of work to push the boundaries and present ‘differently’ to what we are used to seeing.

What does prayer mean to you?
It’s a personal experience between me and God, but it is also about community, as communal prayer is a foundation of Islamic prayer. So, we can’t separate prayer as a personal experience from the ‘politics’ around it, especially as the Muslim community – as a minority in this society – is so often misrepresented. Prayer is a very visual display of faith and something so familiar to the public. It can be seen even on football pitches after a goal or in public parks when large prayer moments happen such as the Muslim Eid festival. It’s become too easy to attach negativity with the physical act of prayer, mainly because often people just don’t understand it. Prayer for me is personal as well as something very public.

Why should we come to the immersive show?
Islamic prayer would never have been captured in this form ever before. I have described Waswasa as ‘Muslim prayer meets Bladerunner’ (the iconic sci-fi film). Aesthetically, this show is going to be stunning as well as meaningful. It’s for people from the Muslim community as well as for those from outside. It straddles all communities, because prayer and focus are perhaps something we are all striving for, and there should be a thing or two for all of us to learn from.

Waswasa – Whispers in Prayer is staged at Birmingham Hippodrome from August 25 – September 3. www.birminghamhippodrome.com