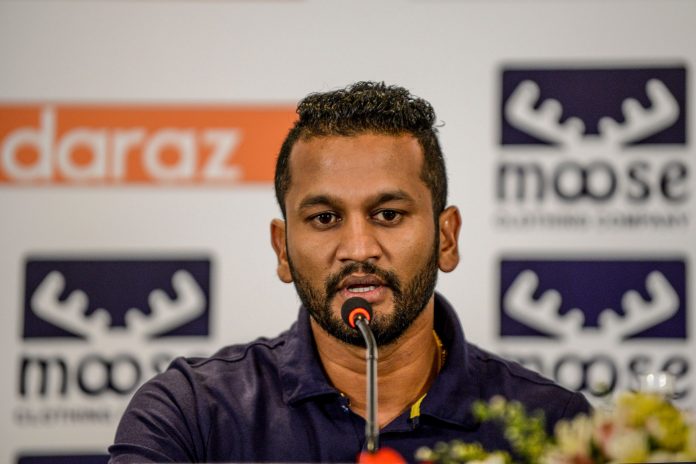 Sri Lankan captain Dimuth Karunaratne said his team would try to stay positive after losing the first Test against South Africa by an innings and 45 runs inside four days at SuperSport Park in Centurion on Tuesday.

Karunaratne bemoaned the injuries that derailed his bowling attack, with fast bowlers Kasun Rajitha and Lahiru Kumara both suffering groin injuries and being unable to bowl again.

ŌĆ£We were in the driving seat after scoring nearly 400 runs,ŌĆØ the skipper said. ŌĆ£We were doing pretty well as a batting unit but we lost a couple of bowlers.ŌĆØ

Sri Lanka were bowled out for 180 in the second innings despite half-centuries from Kusal Perera (64) and debutant Wanindu Hasaranga (59).

Karunaratne said Rajitha and Kumara would not have time to recover before the second and final Test, which starts at the Wanderers in Johannesburg on Sunday.

But he expected key bowler Suranga Lakmal to have recovered from the hamstring injury which kept him out of the first Test, while fast bowler Dushmantha Chameera was waiting in the wings.

ŌĆ£We have another game to go and I will try to keep them together. We need to keep a positive mindset. Suranga and Dushmantha can do a good job for us,ŌĆØ he said.

Sri Lanka also lost batsman Dhananjaya de Silva, who was ruled out of the series with a torn thigh muscle after scoring an impressive 79 in the first innings. He did not bat in the second innings.

Karunaratne did not indicate who might replace De Silva at the Wanderers but hinted it could be a ŌĆ£youngsterŌĆØ.

De Kock said he was disappointed with South AfricaŌĆÖs bowling performance at the start of Sri LankaŌĆÖs first innings but ŌĆ£we came back nicelyŌĆØ towards the end of the innings.

He said a strong batting performance had been set up by openers Dean Elgar and Aiden Markram, who put on 141 for the first wicket.

ŌĆ£Getting off to a great start always helps the team. There were quite a lot of demons in the wicket but they played some great cricket shots and showed great intent and that filtered through to the rest of the batting line-up.ŌĆØ

He praised Du Plessis and Temba Bavuma for rebuilding the innings after a flurry of wickets left South Africa on 220 for four. ŌĆ£ItŌĆÖs important that senior guys in the team stand up. ThereŌĆÖs no better person to have in that situation than Faf.ŌĆØ

Looking ahead to the second Test, De Kock said he was encouraged by the way the bowlers performed in the second innings. ŌĆ£The seamers came out with great intent with the ball and to finish it off the way we did was very pleasing.ŌĆØ

South Africa went into the first Test with an inexperienced pace bowling line-up, with the four seamers only having 12 previous caps and 35 wickets between them.

They are likely to be bolstered by the return of Kagiso Rabada, who has played in 43 Tests, but De Kock said new cap Lutho Sipamla and all-rounder Mulder, playing his second Test, had both performed well.

Sipamla overcame a nervous start, in which he conceded 38 runs in his first five overs, to finish with match figures of six for 100, while Mulder provided accuracy and control in taking two wickets in each innings.

Kartik Aaryan and Triptii Dimri in Sharan SharmaŌĆÖs next? HereŌĆÖs what Karan Johar has to say