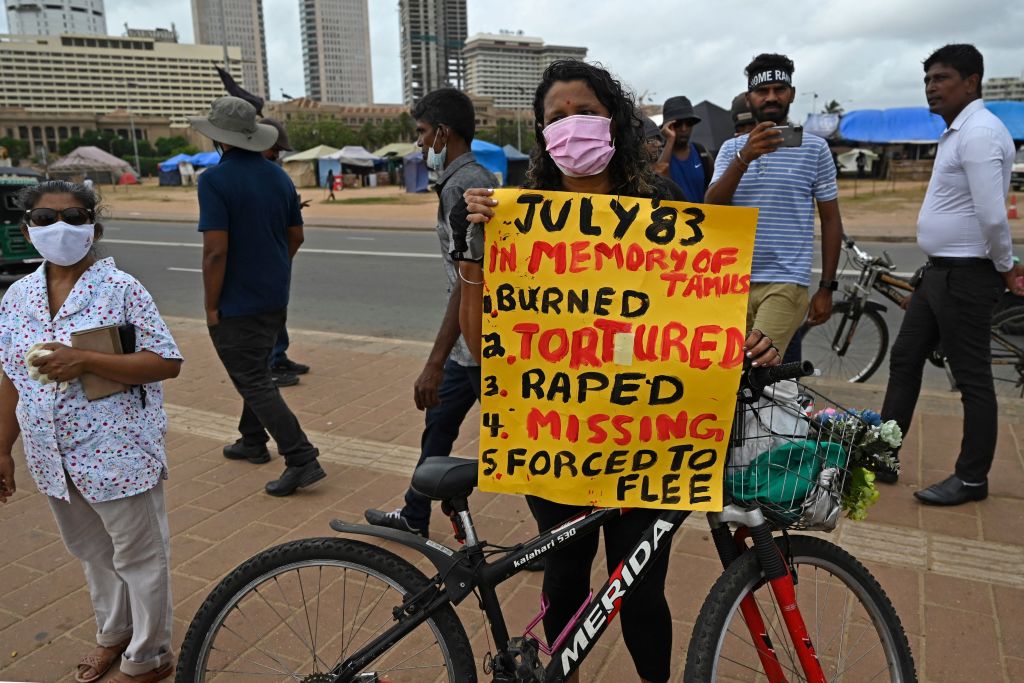 A demonstrator holds a placard during a protest to observe the anniversary of anti-Tamil rioting that started in the year 1983 also known as Black July near Presidential Secretariat in Colombo on July 24, 2022. (Photo by Arun SANKAR / AFP) (Photo by ARUN SANKAR/AFP via Getty Images)

Sri Lankan President Ranil Wickremesinghe on Wednesday (23) said he will convene an all-party meeting next month to resolve the long held demand for political autonomy for the minority Tamils in the island nation.

Addressing parliament, Wickremesinghe said he would call the meeting after December 11, when the parliament concludes its work on the budget 2023.

“Mr Sumanthiran (a Tamil parliamentarian) mentioned everything we had done since 1984 to resolve the issue,” Wickremesinghe said, adding that “we must find a solution, if not even by 2048 Sri Lanka would remain the same”.

Wickremesinghe said it was important to build trust between the majority Sinhalese and the Tamils to resolve the long standing conflict.

He stressed that even by Sri Lanka’s 75th anniversary of independence on February 4 next year the country must find a solution.

“We have to win the confidence of Tamils, Sinhalese and Muslims…,” he said.

The Tamils and the main opposition parties have expressed willingness to meet to discuss while at least one Sinhala majority hardline parliamentarian objected to the proposal.

Sri Lanka had had a long history of failed negotiations to end the Tamil claim of discrimination by allowing some form of political autonomy.

An Indian effort in 1987 which created the system of a joint provincial council for the Tamil dominated north and east was faltered as the Tamils claimed it fell short of full autonomy.

Wickremesinghe himself tried an aborted constitutional effort between 2015-19 which too came to be scuttled by the hardline majority politicians.

The Tamils put forward their demand for autonomy since gaining independence from Britain in 1948 which from the mid 70s turned into a bloody armed conflict.

Velupillai Prabakaran led a three decade-long bloody separatist campaign under the banner of the Liberation Tigers of Tamil Eelam to establish a separate Tamil homeland in the northern and eastern province of the island nation.

India has been pressing Sri Lanka to implement the 13th Amendment which was brought in after the Indo-Sri Lankan agreement of 1987.

The 13th Amendment provides for devolution of power to the Tamil community.