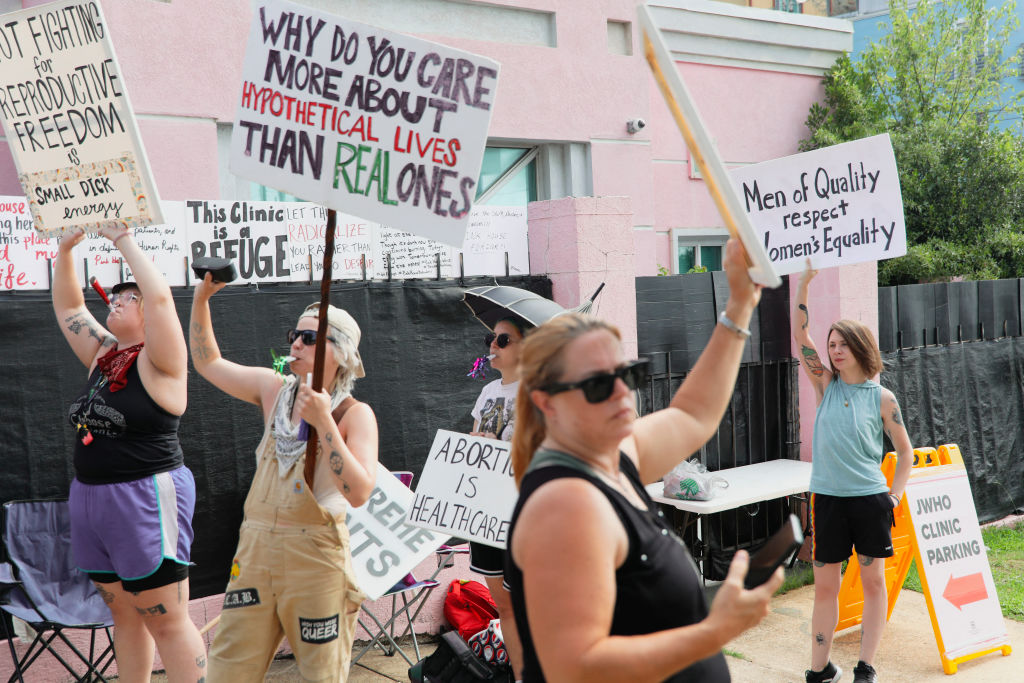 Pro choice demonstrators protest in front of the Jackson Women’s Health Organization in Jackson, Mississippi, on July 7, 2022. – The clinic is the only facility that performs abortions in the state. A judge on July 5, 2022, rejected a request by the clinic to temporarily block a state law banning most abortions. (Photo by SANDY HUFFAKER / AFP) (Photo by SANDY HUFFAKER/AFP via Getty Images)

South Carolina’s highest court on Wednesday blocked enforcement of a state law banning abortions after about six weeks of pregnancy while it considers a challenge to the law by a Planned Parenthood affiliate and other abortion providers.

In a unanimous order, the five justices of the South Carolina Supreme Court did not express any opinion on whether Planned Parenthood is ultimately likely to prevail. However, they said the ban could conflict with the state’s constitution.

“At this preliminary stage, we are unable to determine with finality the constitutionality of the Act under our state’s constitutional prohibition against unreasonable invasions of privacy,” the court wrote.

“We applaud the court’s decision to protect the people of South Carolina from this cruel law that interferes with a person’s private medical decision,” Planned Parenthood South Atlantic President Jenny Black said in a statement.

“While we are disappointed, it’s important to point out this is a temporary injunction,” said Robert Kittle, a spokesman for South Carolina Attorney General Alan Wilson. “We will continue to defend the law.”

About half of U.S. states are expected to seek to restrict abortions or have already done so, following the U.S. Supreme Court’s June 24 decision to overturn its landmark 1973 ruling Roe v. Wade, which guaranteed a national right to abortion.

South Carolina in 2021 enacted a law banning abortion when a fetal heartbeat is detected, usually at around six weeks. The law was initially blocked but allowed to take effect after the U.S. Supreme Court’s June ruling.

The state also passed a law in 1974 effectively codifying Roe v. Wade, however, the 2021 law stated that it did not repeal that earlier law. The state Supreme Court on Wednesday cited the potential conflict between the two laws as one reason for its temporary order.