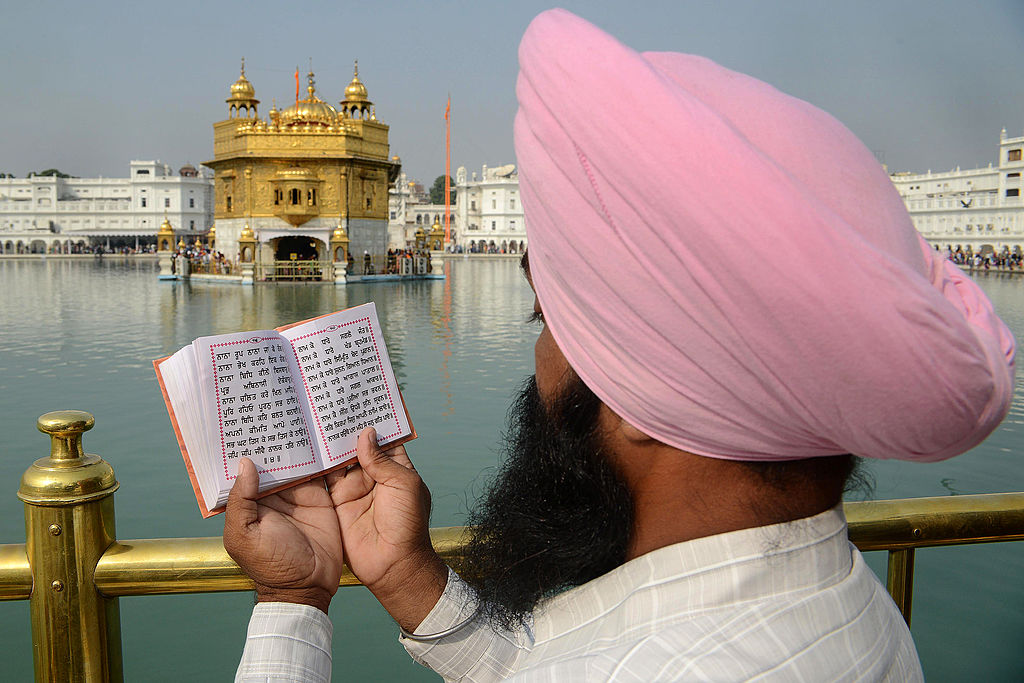 An Indian Sikh devotee reads the Nitnem Gutka – the Sikhism prayer book – at the Sikh Shrine, the Golden Temple in Amritsar on November 18, 2012 on the occasion of Martyrdom Day – Jyoti Jot Divas – of Guru Gobind Singh and Sikh warrior, Shaheed Baba Deep Singh. Guru Gobind Singh, who was the Tenth and the last of the living Sikh Gurus, initiated the Sikh Khalsa in 1699, passing the Guruship of the Sikhs to the Eleventh and Eternal Guru of the Sikhs, the Guru Granth Sahib. AFP PHOTO/NARINDER NANU (Photo credit should read NARINDER NANU/AFP via Getty Images)

A specially designed waterproof prayer book filled with “tactical” hymns and prayers has been launched in London for British Sikhs to carry with them on duty and to the battlefield.

The Nitnem Gutka Sahib, as the collection is known, is made of durable material with a camouflage design and was inspired by images of troops in the trenches of the First World War.

It was launched and handed over to military personnel recently at the Central Gurdwara Khalsa Jatha in Shepherds Bush in west London.

“This is not something new, but a reintroduction of a tradition last seen over 100 years ago, during World War I,” said the Defence Sikh Network UK, behind the project.

“Sikhs in UK Defence now have a tactical water/tearproof Gutka to use wherever they serve, in whatever conditions,” it said.

Major Daljinder Singh Virdee, Chair of the Defence Sikh Network, says that the idea for the prayer book project was inspired by an image of a Sikh soldier with a prayer book in the trenches of France in World War I, during which many many Sikh soldiers fought with the Allied Forces and later in the Second World War as well.

“The Army has been providing Christian religious texts for many years and I saw the opportunity there to open the door for the Sikh faith to provide Sikh texts,” Virdee told the BBC.

“For Sikhs, our scriptures are not just words, they are the living embodiment of our Guru. We draw moral strength and physical strength from reading the scriptures every day, it gives us discipline and it grows us spiritually,” he said.

The new multilingual prayer book is designed to keep Sikhs within the military close to their faith wherever they go and has been made available across all forces. While the British Army Gutka has a camouflage cover, the Royal Navy and Royal Air Force (RAF) Gutka have a navy blue cover.

“By providing a Nitnem Gutka for serving Sikhs across the UK MoD we hope to directly support Sikhs practice a key component of their faith wherever they travel and work in whatever conditions,” a UK Ministry of Defence (MoD) spokesperson said.