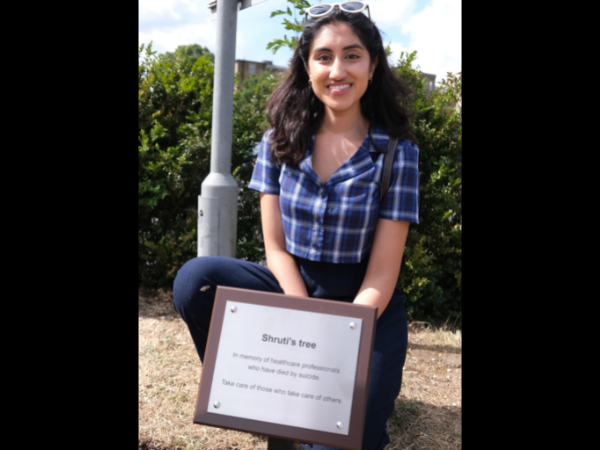 Author and former doctor Adam Kay has planted a tree in memory of NHS staff who have died by suicide.

Hundreds of health professionals have taken their own lives in the past decade, with the demands of their jobs only intensifying throughout the pandemic.

The Gingko tree was planted outside Ealing Hospital, which was the location for hit BBC drama This is Going to Hurt, which was written by Kay and based on his real-life diaries from the hospital wards.

The show focused on the mental wellbeing of NHS staff working under extraordinary pressures and culminated in the death by suicide of a fictional junior doctor called Shruti.

A moving scene sees a tree planted outside the hospital in Shruti’s memory, and sparked numerous real life visits from people trying to find the location.

The ensuing interest led to a conversation between Adam and the hospital trust and the agreement that a real tree would be a fitting tribute to NHS staff nationwide who have taken their lives.

Kay was joined by actress Ambika Mod who played Shruti in the show.

Kay said, “Suicide among healthcare workers has long been a taboo subject which has been ignored and brushed under the carpet. I will be forever grateful to the BBC for allowing me to bring this crucial topic to the attention on millions of viewers.

“I have no doubt that talking more openly about mental health will save lives. My thanks go to the hospital trust for being wonderfully supportive of the first UK memorial to healthcare workers who have died by suicide.”

The ceremony was a poignant moment for Ealing surgeon Peter McDonald who remembers a colleague taking their own life due to work pressures earlier in his career.

McDonald, 70, said: “I always stress to younger doctors the importance of not bottling things up and talking to someone. It’s not a sign of weakness and that other person can be a loved one, a friend, colleague or a therapist. We are all human at the end of the day.”