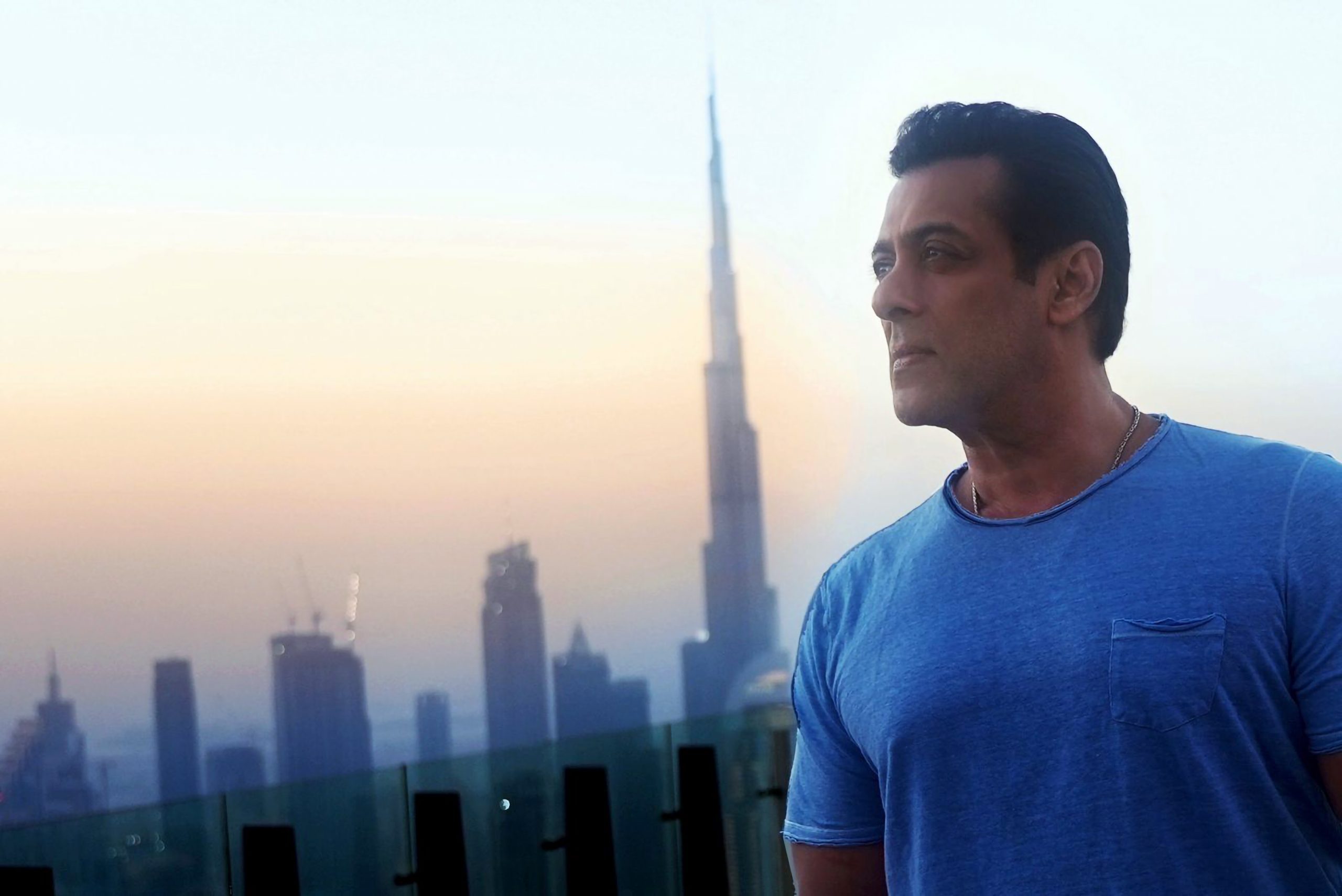 This week marks 34 years since movie superstar Salman Khan made his Bollywood acting debut with a supporting role in comedy drama Biwi Ho To Aisi, which released on August 22, 1988.

He has since gone on to become one of the most successful stars in Indian film history and headlined huge blockbusters that have entertained audiences around the world. He continues to be heavily in demand and will no doubt receive warm wishes for his 34th acting anniversary.

Eastern Eye decided to mark the occasion with a deep-dive into his cinema journey and an all-you-need-to-know A to Z about his extraordinary career.

A is for Assistant: Salman Khan started off his career as an assistant director with 1988 film Falak. The action-crime drama was headlined by Jackie Shroff, who remembers working with Salman fondly, and said: “He’s been an assistant director on my film in the beginning and read my lines. I know what he can do from then, and he is doing it really well. I think the spark I saw back then has become a huge star now.”

C is for Chulbul Pandey: Whether it was Prem in Maine Pyar Kiya or Tiger in Ek Tha Tiger, the actor has played some memorable characters. One of the characters most synonymous with him is Chulbul Pandey in Dabangg. He has played the fearless police officer, not afraid to break the law in three films and won acclaim for his performance.

D is for Debut: After working as an assistant director, Salman finally made his acting debut with a supporting role in Biwi Ho To Aisi (1988), but had his voice dubbed by someone else. He would gain stardom the following year in super hit movie Maine Pyar Kiya, and there was no looking back after that. His success would repeatedly draw attention to Biwi Ho To Aisi.

E is for Eid: The festival of Eid has become synonymous with Salman Khan and resulted in him starring in a huge number of super hit films on the lucrative release date. His Eid films that have become major hits include Wanted (2009), Dabangg, Bodyguard (2011), Ek Tha Tiger, Kick (2014), Bajrangi Bhaijaan, and Sultan. No other star has scored as many hits on Eid.

G is for Gym: Today, most Bollywood stars have chiselled physiques and a trigger point for that change was fitness fanatic actor Salman. His muscular look helped redefine the Bollywood leading man and inspired others to get in shape. Many of those muscular stars have openly said that Salman was their inspiration, and this led to some stripping onscreen (see X).

H is for Hum Aapke Hain Koun: The wedding-set family drama, headlined by Salman Khan and Madhuri Dixit, became the highest grossing Hindi film in history when it released in 1994. This is one of many records the actor has broken across his career, which includes starring in the highest grossing Bollywood film of the year more times than any other lead actor in history (see Y).

I is for International: The actor has stayed away from Hollywood despite getting various offers across the years, but did agree to act opposite Ali Larter in English language film Marigold: An Adventure in India (2007). Unfortunately, the film, which was designed to bridge the Hollywood-Bollywood gap, didn’t do the expected business, despite being a decent effort.

J is for Jokes: Although he has been most famous for action and romantic roles, the actor has consistently shown great comic timing throughout his career. Whether it has been hit comedies such as Judwaa (1997), where he played a double role for the first time, or in light-relief in other genres, Salman has effortlessly delivered laughter-filled moments. His greatest comedy film is arguably Andaz Apna Apna (1994).

K is for Katrina Kaif: It is widely believed that Salman Khan opened a lot of doors for his then girlfriend Katrina Kaif and kickstarted her remarkable career. She is one of many newcomers he has helped across the years. Others have included singer Himesh Reshammiya, musical duo Sajid Wajid, director Sanjay Leela Bhansali, and many actors. He also helped resurrect Govinda’s career by giving him a role in hit film Partner (2007).

L is for Longevity: Salman Khan has been an in-demand A-list star for 33 years, which is one of the longest in Hindi cinema history. That magical run doesn’t look like ending anytime soon, with more high-profile projects on the way (see U).

M is for Money: Not surprisingly, Salman has been one of the highest paid stars in Bollywood for decades and that has often increased with shares in the box office. He also has a production company, which helps add to the considerable wealth he has generated from cinema.

N is for No: Being massively in demand means the actor has rejected high-profile films across the years. Those he reportedly refused included Baazigar (1993), Dilwale Dulhania Le Jayenge (1995) and Chak De India (2007), which turned out to be hits for Shah Rukh Khan. He also said no to Saif Ali Khan’s award-winning role in Kal Ho Naa Ho (2003) and was rumoured to have turned down super hit Aamir Khan-starrer Ghajini (2008).

O is for Other heroes: Being a big star hasn’t made Salman shy away from acting in multi-starrers such as Hum Saath Saath Hain (1999), No Entry (2005) and Salaam-e-Ishq (2007) or playing a sterling supporting role in blockbuster hits such as Kuch Kuch Hota Hai (1998). He also has a huge number of films where he has been a parallel lead, such as Saajan, Andaz Apna Apna, Karan Arjun (1995), Hum Dil De Chuke Sanam, and Mujhse Shaadi Karogi (2004). The actor has also made a number of small cameos (see Z).

P is for Producer: The actor produced films with mixed results. Although he scored a big success with Bajrangi Bhaijaan and received acclaim for Chillar Party (2011), his other home productions such as Hero (2015), Tubelight (2017), Race 3 (2018), LoveYatri (2018), and Notebook (2019) have been failures. His next home production is forthcoming film Kabhi Eid Kabh Diwali.

Q is for Queens: The actor starred opposite most of the top leading ladies from the past three decades, including Madhuri Dixit, Sridevi, Karisma Kapoor, Preity Zinta, Aishwarya Rai, Rani Mukerji, Priyanka Chopra, Anushka Sharma, and Katrina Kaif. A notable absentee from the list has been current Bollywood queen Deepika Padukone, who has rejected a number of films with him.

S is for Setbacks: Like many established stars, the actor has had high-profile flops in his career, but always struck back with a blockbuster. Some of the high-profile recent setbacks have included Tubelight, Race 3, Bharat, Dabangg 3 (2019), Radhe (2021), and Antim (2021).

T is for Tiger: In terms of box office, the most successful franchise the actor has starred in has been playing fearless superhero Tiger. He will follow up blockbuster hits Ek Tha Tiger and Tiger Zinda Hai with forthcoming film Tiger 3. His character will also have an extended cameo in Shah Rukh Khan’s forthcoming film Pathaan (2023) and is likely to have a fourth instalment.

U is for upcoming films: The actor’s upcoming films include Kabhi Eid Kabhi Diwali and Tiger 3. He also has extended roles in Telugu film Godfather, which is headlined by Chiranjeevi, and Shah Rukh Khan-starrer Pathan.

V is for Violence: Although he predominantly made a name for himself with romance and comedy, the actor carved out a niche for himself as an action hero in the second half of his career and hasn’t shied away from extremely violent scenes in high-profile films. These action movies connected him to the masses.

W is for Writing: The actor has tried following in the footsteps of his legendary father Salim Khan by attempting to write. He came up with the story of Baaghi (1990) and Chandra Mukhi (1993). He was credited as writer for the films Veer (2010) and Dabangg 3 (2019).

X is for X Rated: If Bollywood actors are regularly taking off their tops to reveal glistening six-packs and sometimes even more, then it is all because of Salman. He popularised the trend of removing his top in Bollywood films and this evolved into more daring actors pushing the envelope further.

Y is for Yearly success: Salman has had more highest grossing movies of the year than any Bollywood star in history. His top yearly grossing films have included Maine Pyar Kiya, Saajan, Hum Aapke Hain Kaun, No Entry, Dabangg, Bodyguard, Ek Tha Tiger, and Bajrangi Bhaijaan. In 1999, he had the three highest grossers with Hum Saath Saath Hain, Biwi No 1, and Hum Dil De Chuke Sanam.