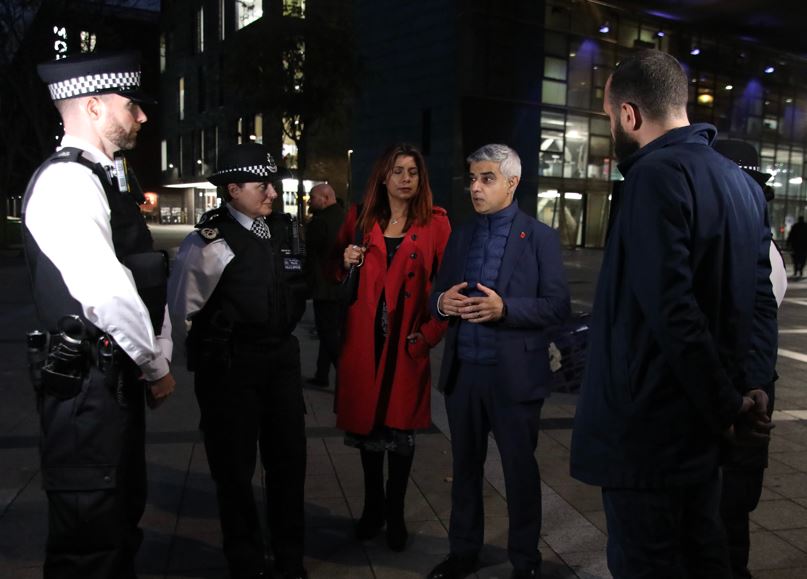 London mayor Sadiq Khan has said that tackling violence is his top priority as he will continue to lead from the front in the city by being tough on crime and its complex causes.

Khan and the Met’s head of Frontline Policing Assistant Commissioner Louisa Rolfe joined local neighbourhood police officers on patrol in Peckham Town Centre on Thursday (10) to see first-hand the work being done by the officers, a statement said.

Mayor said that the level of violence in London remains high and the cost of living crisis may jeopardise the progress made to address violence in the city.

“Record investment from City Hall in the Met and London’s Violence Reduction Unit has meant violence in the capital has reduced since 2016, with knife crime, gun crime, burglary and teenage homicides all falling, bucking the national trend. But more must be done,” Khan said.

“I am continuing to take action by supporting our hardworking police officers to keep our city safe and investing record amounts in initiatives through London’s Violence Reduction Unit to support young Londoners at critical stages in their lives.”

Khan added: “The officers I’ve been out with on Thursday are part of 650 Town Centre and Safer Neighbourhood police officers directly funded by City Hall to take weapons off our streets, drive down violence and be there when the public needs them most so we can build a safer London for everyone.”

According to the statement, the Met target the most dangerous offenders, maximising diversion opportunities and increasing their presence through targeted patrols in key hotspots across London’s communities.

It claimed that the level of knife crime and violence in London has been decreasing since before the pandemic.

This year, with support from the mayor, London’s Violence Reduction Unit is investing in positive opportunities for 70,000 young Londoners.

With a record 34,542 officers, both the Met and City Hall are trying to restore trust and confidence in the police, improve the support for victims of crime, and build on the success made in driving down violence and crime to build a safer London, the statement further said.

Assistant commissioner Rolfe, said: “We are working every day to fight and bring down crime. Tackling violence is a team effort and our work with the mayor’s Violence Reduction Unit is crucial to this.

“We are clear that we are proactively and forensically targeting the drivers of violent crime, and this week, specialist teams have been tackling high-harm offenders involved in supplying drugs across London, including in Southwark. This builds on the success of the Met’s county lines response and is aimed at dismantling intra-London class A drug lines. This way of working brings together the skills and experience of Specialist Crime officers with the knowledge and expertise of local officers.

“Our job is to make it harder for violent and predatory people, drug dealers, criminals and those involved in organised crime to operate. We are also clear that violent crime cannot be solved by policing alone and everyone in the community can play a part.”