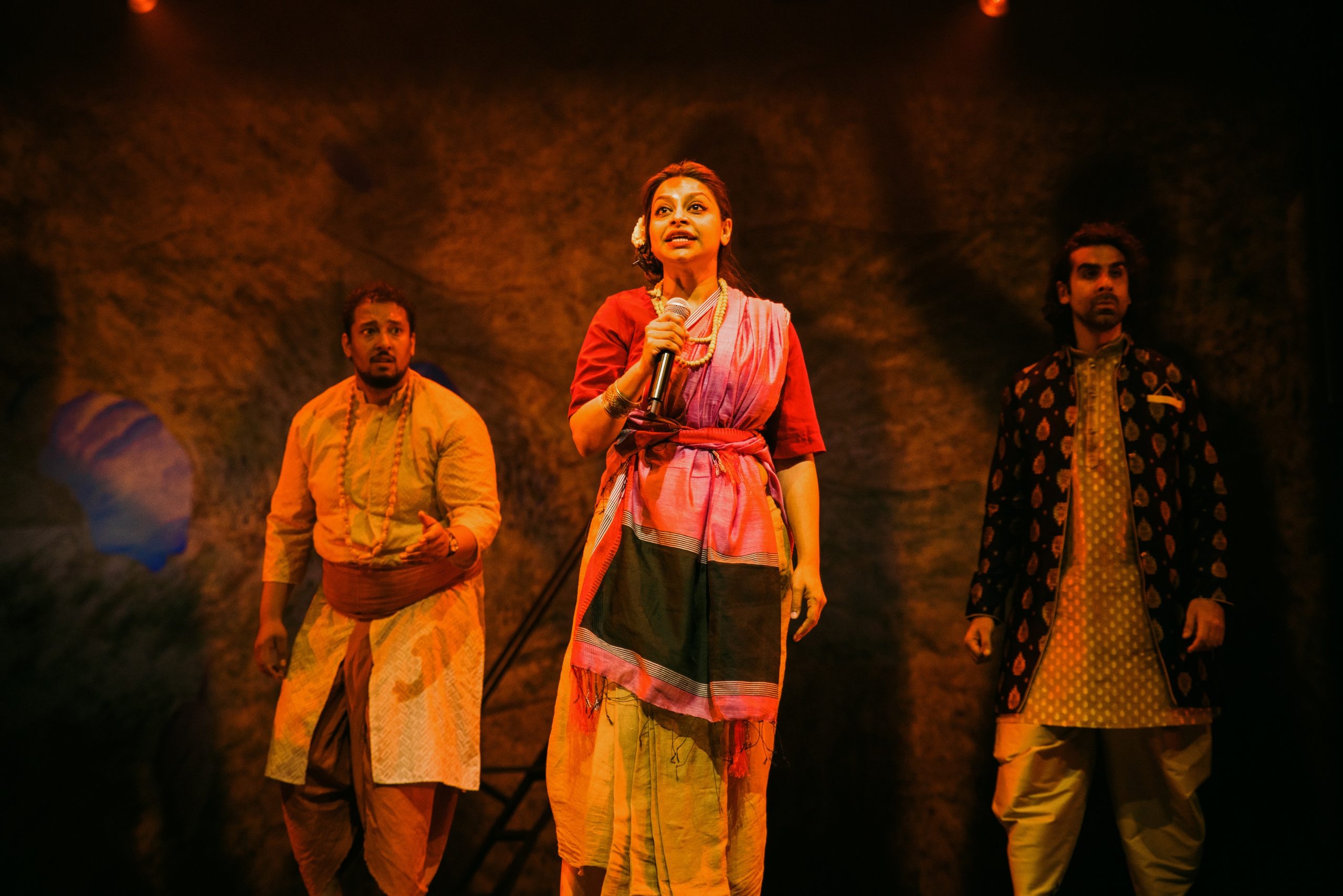 PLAYWRIGHT Sonali Bhattacharyya has taken inspiration from her own family to tell the story of a political activist who arrived in Leicester from Kolkata in the early 2000s for her play Chasing Hares, currently wowing audiences packed at London’s Young Vic.

She wanted to tell the story of political engagement – as it rarely features in stories about migrants, Bhattacharyya said.

“I was really keen to write a story about the legacy of migrant parents in a way that I hadn’t seen before,” she told Eastern Eye.

“I wanted to write about parents who are political and radical, and have sort of idealistic beliefs about how the world could and should be and the legacy they hand down to the next generation. It’s about political empowerment, which isn’t something we see very often in British culture, that story of migrant legacy.”

Chasing Hares revolves around the character of Prab (Irfan Shamji), who is a factory worker and a new father struggling to support his family as the garment factory, the main employer in the area, which has been closed for months.

“The starting point to me writing the play was definitely my family’s experience on my mom’s side in a town called Bandol in Kolkata,” said Bhattacharyya, who based Prab on her uncle.

“The main employer since the 1930s was the Dunlop rubber factory. A lot of families in the area, including my mother’s family, really depended on the factory for work. But in the 2000s, because it became cheaper for Dunlop to move work elsewhere, the factory was closed more often than it was open.

“I wanted to look at what my mum’s family and so many other families across West Bengal had been through and how now the same has increasingly become the norm in the UK.”

With whispers that the factory will reopen, Prab suppresses his former political beliefs and trade union activism in order to make himself more employable.

However, the fire is reawakened in him when he is roped in by the factory owner’s son Devesh (Scott Karim) into writing scenes for a jatra, a type of Bengali folk theatre, traditionally performed in the open air at festivals.

The jatra, described in the play as ‘theatre for the people’, traditionally depicted stories in the Indian epic, the Mahabharata. But post-independence, the form shifted and people would use it as a social platform to tell modern-day stories.

Bhattacharyya said Prab saw the jatra as a potential avenue for him to pursue some of his ‘more radical political ideas in pursuit of cultural resistance’.

“Prab isn’t interested in the jatra. He tells his wife that jatra is theatre for the people, but there aren’t people in the Mahabharata. Prab sees an opportunity because he recognises that a lot of the garment factory workers will be in the audience and he can galvanise them as a collective and rise up to demand better working conditions,” said Bhatia.

“Our central character recognises the power of storytelling, and how storytelling can awaken people and enlighten them to a different perspective. He wants to use theatre as a vehicle for social change.

“And I think, fundamentally, both Sonali and I strongly believe in theatre as a vehicle for social change. That’s why the play really spoke to me when I first read it; because I really recognise that ambition and that need in the central character.”

Prab falls under the trap of Devesh who buys his loyalty by giving him a managerial role at the factory and a plush two-bedroom flat with “luxuries” such as a “power-shower”.

Prab wrestles with his conscience – should he ignore the suffering of his fellow factory workers in order to ensure his family is taken care of? His torment spills over into blazing rows with his wife Kajol (Zainab Hasan), who wants him to put the well-being of their baby daughter over everything else.

“The play doesn’t shy away from the fact that it’s challenging to be in a workplace and that the impact of capitalism is quite corrosive,” said Bhattacharyya.

“Our need to provide for our families, our desires to have a comfortable life, a decent place to live can sometimes make it quite difficult for us to stay true to our political beliefs.”

When the play switches to current day Leicester, Prab urges his daughter Amba to not repeat his mistakes. He encourages her to lead an uprising against a food delivery app she works for on a zero-hour contract.

“Amba learns from her dad that it’s not easy, it’s not straightforward, but there is a sense of power when working together with your peers, and there’s power in collective action, in having those conversations with your colleagues, bringing people together and having the mindset that they actually can do something about it,” said Bhattacharyya. She added: “It’s absolutely crucial we learn from what previous generations went through.

“It offers us confidence in pursuing cultural resistance through workplace and political organising. The older generation offered us a module about how to effectively do that. So it’s both about remembering, but also learning from the older generation.”

Bhatia noted the timing of staging the play when the UK is seeing strike action over working conditions.

She’s (Amba) having a cross cultural conversation about workers’ rights. And what Prab says to his daughter is, ‘you must demand better, you must unionise and you must work collectively’. And that’s really the central message of the play.”

Bhattacharrya added that young Britons can learn from their elders about the importance of being part of a trade union.

“It’s been fantastic to see this new trade union militantism in this country,” she said. “But it’s important to recognise that trade union membership is a historically low in the UK. We need to put forward the need for working class people to be paid properly and have the job conditions they deserve. We need to build on a lot of the anger that’s around at the moment, which is really justifiable. But we need to channel that anger into working together with trade unions.”

Chasing Hares is notable for its strong female characters. Ayesha Dharkar is brilliant as Prab’s jatra co-star Chellem who backs him to follow his desire to stand up against the mafia-like factory owners.

Prab’s wife (Zainab Hasan) has her own mental battles on whether she is doing the right thing in telling her husband to focus on his own family and bury his activist nature. And his daughter Amba (Saroja Lily Ratnavel) transforms from a timid character to one who takes a stand and fights against the system.

“Chasing Hares puts women at the forefront of a lot of the political organising and I was also really interested in that,” said Bhatia.

Both Bhattacharyya and Bhatia started activism work at an early age and conceded that over the years their activism and theatrical work have started to merge.

“I come from a family that challenges things through their work and politically,” said Bhatia, whose mum is the actress Meera Syal. “Ever since I was young, I’ve been volunteering for refugees. And actually the first piece of the theatre work I did was in order to raise money for refugees for south Asian women. “My work comes from wanting to address something I feel an injustice about. I want to cast a wider conversation and recognise the tools in the theatre space to awaken people to it through the means of storytelling.”

Bhattacharyya described herself as an anti-racist and anti-imperialist. Her work and activism were “quite separate”, she said, and added that things have become worse in society and that she uses her plays to address this. “I was very much politicised by things like the British invasion of Iraq and Afghanistan and now things like racism and Islamophobia. I have been involved in a lot of these (non-discrimination) campaigns,” she said.

“My work has probably become more informed because things feel worse. The theatre is place people come together physically in the same space and engage with work that’s happening in real time.

“As I’ve got older, I’ve really wanted to make sure I don’t miss an opportunity to ask some of the harder questions and to point out some of the realities around us.”

Chasing Hares is at the Young Vic until August 1