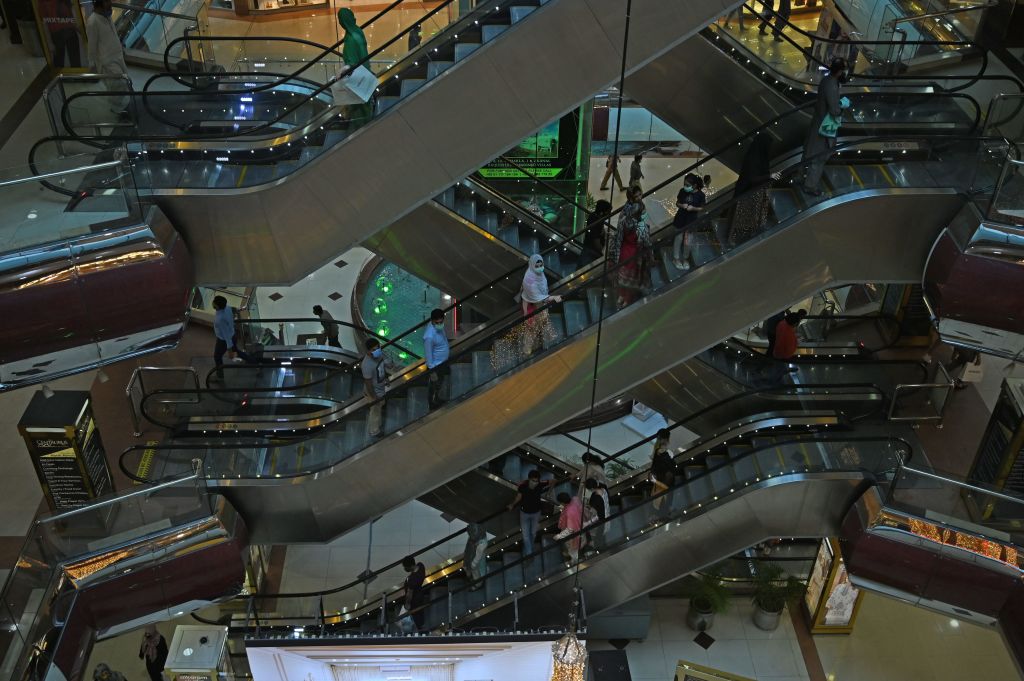 Shoppers are seen inside a shopping mall after the government eased a nationwide lockdown imposed as a preventive measure against the Covid-19 coronavirus, in Islamabad on May 18, 2020. (Photo by AAMIR QURESHI/AFP via Getty Images)

PAKISTAN’S economy made an “encouraging recovery” during the fiscal year 2020-21 but certain vulnerabilities require the government’s attention, The State Bank of Pakistan (SBP) said on Monday (19).

“While the economy made an encouraging recovery during FY21, certain structural vulnerabilities continue to merit attention,” the central bank stated in its “Third Quarterly Report on The State of Pakistan’s Economy” for 2020-21.

To put fix those vulnerabilities the SBP listed four areas.

“First, in the agriculture sector, the secular decline in cotton production needs to be addressed,” said the SBP. It added that to fix this there was a need for the “timely availability of pest-resistant seed varieties,” the Geo News reported.

“Second, in the external sector, the widening of the merchandise deficit needs to be contained to a sustainable level. Greater self-sufficiency in agriculture, through adoption of better farming and crop management practices, and maintenance of adequate stocks can reduce the need to import commodities (such as wheat, sugarcane and cotton) to bridge domestic shortfalls or counter temporary price pressures,” said the SBP.

“Third, efforts are required to mitigate food inflation, triggered largely by supply-side issues in the management of agriculture commodities,” it said.

“Fourth, the twin burdens of debt servicing and a narrow revenue base are leaving less fiscal room for public investment,” said the SBP. To tackle this issue, it urged to accelerate “efforts to broaden the tax base, increase documentation in the economy, improve public financial management, restructure loss-making public sector enterprises, and reduce circular debt of the power sector”.

The report acknowledged that the economic recovery gathered momentum in the third quarter of FY21.

“The turnaround in the industrial sector, particularly large scale manufacturing (LSM), and the services sector, most notably in wholesale and retail trade, played a pivotal role,” it said.

Besides, record production of four out of five important crops – namely wheat, rice, maize and sugarcane – offset the decline in cotton production.

The central bank has forecast the country’s real gross domestic product (GDP) growth at around 3.9 per cent for FY21.

The report concluded that the “economic momentum is expected to accelerate further during FY22”.

“The optimistic outlook is premised on the expanding vaccine roll-out and relatively unhindered continuation of economic activity despite Covid-19,” said the SBP.

The report noted that the “Temporary Economic Refinance facility”, that provides long term lending for industrialisation, and “policy-led surge in construction and housing, and increased Public Sector Development Programe spending,” may act as key growth drivers in the new fiscal year.