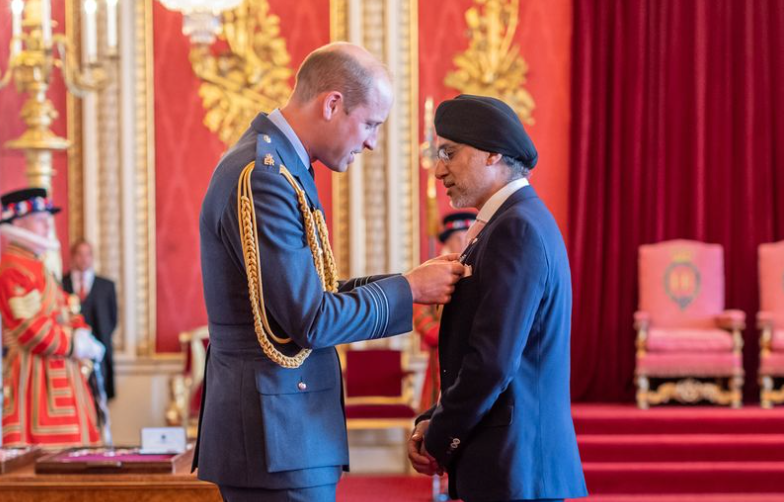 Derby’s de-addiction campaigner Jaz Rai waited for a year to receive his OBE honour in person but after collecting the medal from Prince William recently, he felt the wait was worth the “enjoyable experience”.

The founder of the charity Sikh Recovery Network made it to the Queen’s birthday honours list last year because of his service to the Sikh community during covid-19. However, the Rolls Royce worker could not travel to Buckingham Palace then to collect the medal amid the pandemic-induced restrictions.

But when the former alcoholic actually received the honour from the Duke of Cambridge, the whole experience was “a bit surreal and at times overwhelming”.

Rai founded the Network at the Sikh temple Guru Arjan Dev Gurdwara in Stanhope Street in 2016 after his own alcoholism saw him drink up to a litre of vodka a day at one stage.

He said the number of men and women seeking help increased during the pandemic when it was hard to attend groups and meetings for help to overcome addictions.

He said: “People have been really struggling… It has been hard work making sure that everyone gets help. The pandemic has created many problems and raised fears and anxieties which have resulted in some people relapsing and others taking to drinking or drugs because of pressures.”

More people are seeking help now than in 2019, he said.

He recalled his own experience of week-long binge drinking and its effect on his body, saying he once went into an “alcohol-induced fit” when he stopped it for a few hours.

According to him, his family hid his alcoholism from others because of the taboo associated with the addiction and this only made the situation “worse”.

“Setting up the charity helps me and allows me to give back to the community”, he said of the Network, which is accessible over the phone (07830 525756). It welcomes anyone struggling with addition during its weekly programme on Fridays.