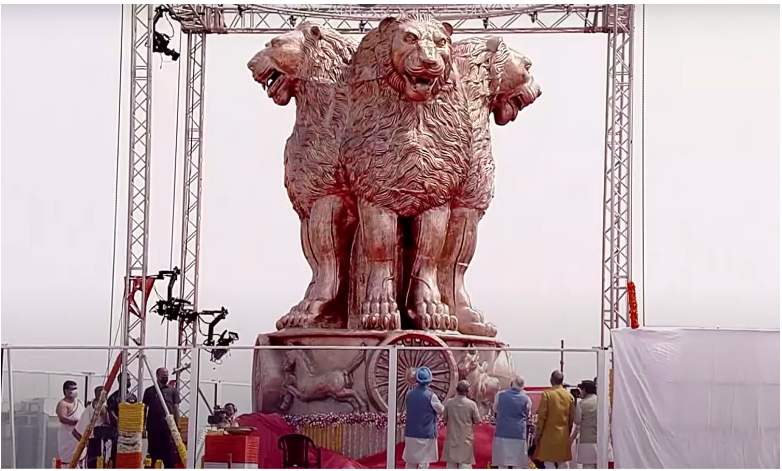 Opposition parties slammed Prime Minister Narendra Modi on Monday over the unveiling of a cast of the national emblem atop the new Parliament building, hurling a slew of accusations ranging from the absence of opposition leaders, conducting a religious ceremony on Parliament premises and “subverting” the principle of constitutional separation of powers.

Modi unveiled the national emblem cast on the roof of the new Parliament building and also attended a religious ceremony at the site.

“The Constitution separates powers of Parliament, government, and judiciary. As head of the government, the Prime Minister should not have unveiled the national emblem atop the new parliament building,” All India Majlis-e-Ittehadul Muslimeen (AIMIM) president Asaduddin Owaisi wrote on Twitter.

“The Speaker of Lok Sabha represents Lok Sabha which isn’t subordinate to the government. The prime minister has violated all constitutional norms,” the Lok Sabha MP from Hyderabad added.

In a statement, the CPI(M) politburo said the prime minister’s action was a “clear violation of the Indian Constitution”.

It said the Constitution unambiguously separates the three wings of the country’s democracy — the Executive (government), the Legislature (Parliament and the state assemblies) and the Judiciary.

“President summons the Parliament. Prime minister is the head of the Executive. The Legislature has its independent role to perform, amongst others, to legislate laws, keep the Executive accountable and answerable,” it said.

“This Constitutional separation of powers between the three wings is being subverted by the head of the Executive,” the Communist Party of India (Marxist) said.

Hitting back at Owaisi, the ruling Bharatiya Janata Party (BJP) said he is driven by a negative mindset and constantly attacks the country’s political, moral, social, cultural and constitutional values to run his party.

“He does it habitually,” BJP spokesperson Sudhanshu Trivedi said, replying to a question at a press conference here.

Citing a verse, Trivedi said even the best doctors have no cure for doubts.

He added that only those with “official and statutory” positions were involved in the unveiling of the emblem.

Nationalist Congress Party (NCP) leader Majeed Memon wondered why the government had kept opposition leaders away from the ceremony to unveil the national emblem atop the new Parliament building.

He said he had no objection to the prime minister unveiling the national emblem, adding, “It is his right as he is the tallest leader of the country.”

The CPI(M) also took objection to the religious ceremony organised at the event.

“National emblem installation should not be linked to religious ceremonies. It is everyone’s emblem, not those who have some religious beliefs. Keep religion separate from national functions,” it said in a tweet.

CPI general secretary D Raja said Parliament belongs to everyone and wondered “how a private, personal event” was organised there.

“Also, Parliament is neutral. So why bring religious functions into it?” he asked.

Rajya Sabha member of the Trinamool Congress (TMC) Jawhar Sircar questioned why MPs were not consulted in the process.

In a tweet, he said: “4 lions of this regime watch as PM lifts the 4 lions of the national emblem on top of the new parliament building. But MPs, who will occupy this building, were never consulted. Modi will now zap us with a mediocre architecture designed by his crony architect — at exorbitant costs.”

Sircar’s party colleague and fellow Rajya Sabha MP Santanu Sen also raised the issue of the absence of opposition leaders from the function.

“How many opposition leaders were found when @narendramodi was unveiling the #NationalEmblem today? Weight of the emblem is 9500 kg, which is even less than the weight of arrogance of @BJP4India Govt. Isn’t this new Parliament for oppositions too? Absolute killing of Federalism (sic),” Sen wrote on Twitter.

While the Congress officially did not comment on the matter, one of its leaders and former BJP MP Udit Raj raised the issue of Hindu rites being performed on the Parliament premises.

“Mr Modi unveiled the emblem on the new Parliament building. Does it belong to BJP? Hindu rites are performed, India is a secular nation. Why other political parties were not invited? Indian democracy is on peril,” he said in a tweet.

Officials said the emblem has been cast at the top of the central foyer of the new Parliament building and a supporting structure of steel, weighing around 6,500 kg, has been constructed to support it.