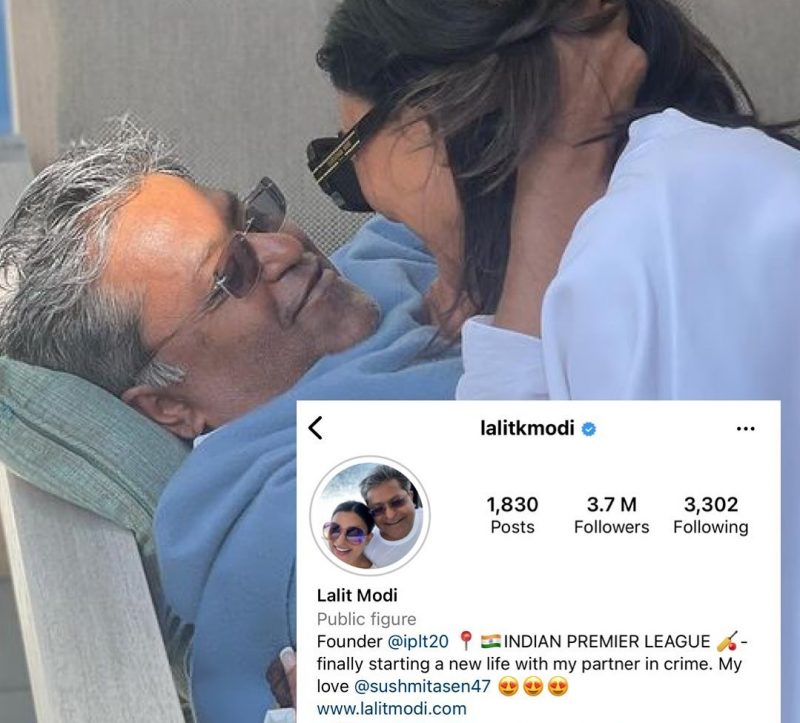 After Indian Premier League founder Lalit Modi announced that he is currently dating former Miss Universe Sushmita Sen and the couple is planning to get married soon, Netizens have been having a meme fest.

Taking to Twitter, Modi, 56, dropped a string of pictures with the ‘Main Hoon Naa’ actor, to which he captioned,” Just back in London after a whirling global tour #maldives # sardinia with the families – not to mention my #better-looking partner @sushmitasen47- a new beginning a new life finally. Over the moon. In love does not mean marriage YET. BUT ONE THAT For sure.” In another tweet, he wrote:

Soon after the IPL Founder announced their linkup, netizens have a mixed reaction to the news, some poured in wishes to Lalit-Sushmita, whereas some people mocked them for their 10-year age gap.

Lalit was previously married to Minal Sagrani, whom he married in October of 1991. They had two children together – son Ruchir and daughter Aliya.

Lalit is also a stepfather to Karima Sagrani, from Minal’s first marriage. Unfortunately, Minal lost her life to cancer in 2018.

On the other hand, Sushmita was in a relationship with model Rohman Shawl, whom she met through Instagram in 2018, but broke up with him last year. She is a mother of two adopted daughters Renee and Alisah.

Meanwhile, on the work front, the Aankhen actor was last seen in Disney+ Hotstar’s Aarya Season 2, which gathered positive responses from the netizens.

Sushmita recently announced that the production work for the third season of her crime thriller series ‘Aarya’ has already begun.