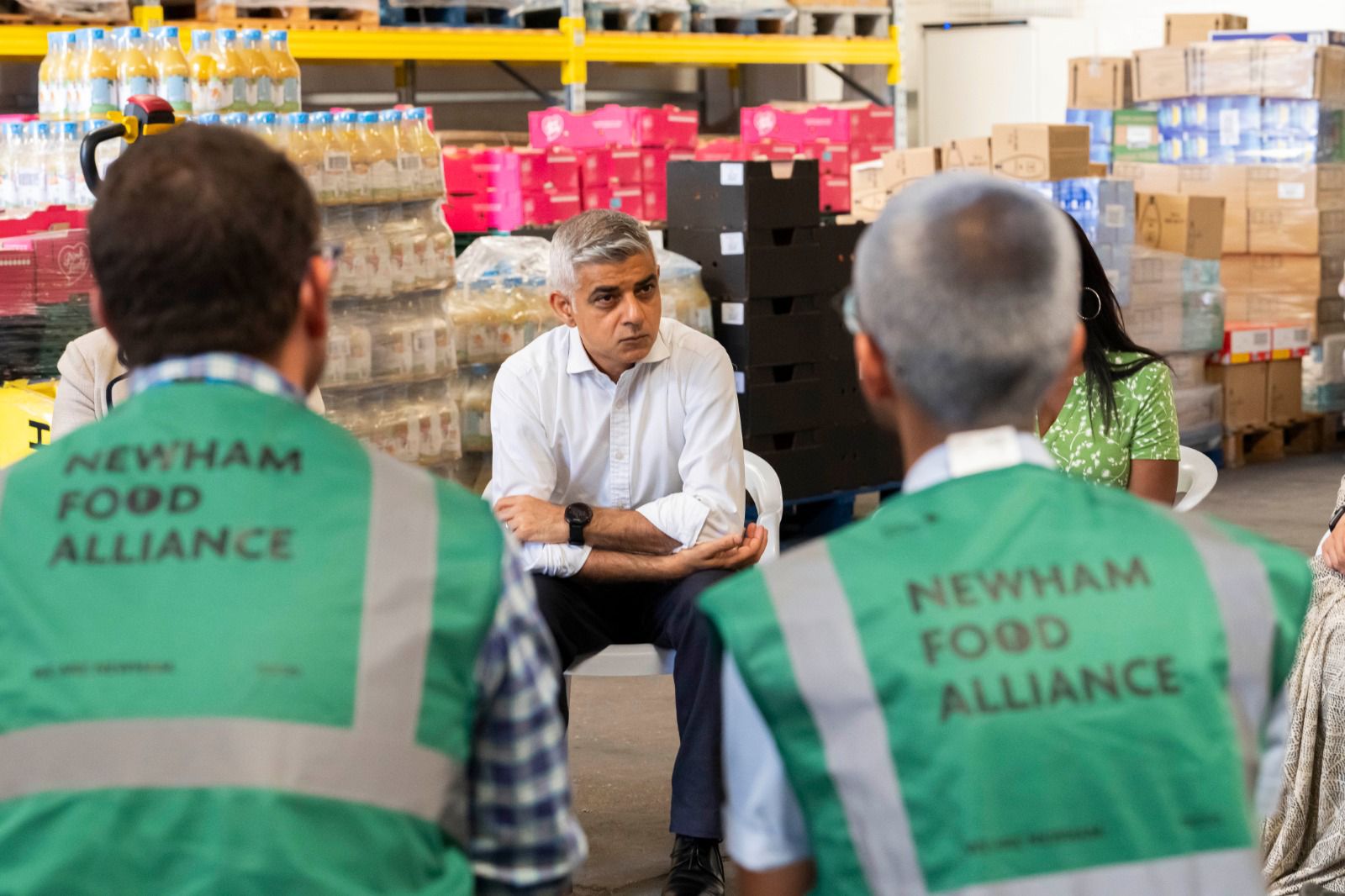 The Mayor of London, Sadiq Khan, today urged the Government to focus on tackling the spiralling cost of living and stop this from becoming a national disaster. This comes as a new online poll comprising 1,245 adults, reveals that 20 percent of lower-income Londoners have regularly or occasionally gone without food or essential items or relied on outside support in the last six months.

The research has found that the number of Londoners being hit by the rising cost of living is also going up every month, with nearly a third saying they are ‘just about managing’ and almost one in five saying they are ‘financially struggling.’.

Those hit the hardest and most likely to say they are financially struggling are the Asian and Black Londoners, and those with an income of less than £20,000. It also includes renters and Deaf and Disabled Londoners.

Based on the polling report that was published today, paying energy bills is reported to be the top concern for Londoners (41 per cent), followed by wages not matching rising prices (31 per cent), then affording other household bills (26 per cent). Also, in order to try and manage the increasing costs, the poll showed that 47 per cent of Londoners are buying cheaper products; 46 per cent are spending less on non-essentials, and 35 per cent are using less water, energy or fuel.

Also, as mentioned above, nearly a third (30 per cent) of Londoners say they are ‘just about managing’ and almost one in five (19 per cent) are ‘financially struggling’.

The poll also shows that one in five Londoners earning less than £20,000 have regularly or occasionally gone without food or essential items or relied on outside support, with more than one in three buying less food and essentials overall, and one in 10 going without essentials.

Furthermore, the poll states that more than one in 10 Londoners (12 per cent) say they have regularly or occasionally been unable to buy food or essential items or relied on outside support in the last six months.

The data was published today as the Mayor visited the Newham Food Alliance warehouse hub run by the Council, which collects food and passes it on to foodbanks across the borough. During his visit to the warehouse, the Mayor also spoke to users of a local foodbank.

Sadiq is reportedly doing all he can to offer support to Londoners and is spending more than £80m this year to help those struggling with the rising cost of living. That includes more than £50m to tackle fuel poverty through the Mayor’s Warmer Homes programme and energy advice services, more than £20m to improve security for private renters and house Londoners who are rough sleeping or homeless, more than £5m to connect Londoners with welfare advice, and £400,000 to tackle food insecurity.

Mayor Sadiq Khan is quoted as saying, “I’m determined to build a better, fairer London for everyone, but the spiralling cost of living is hitting Londoners harder every single month and, with no sign of this rise in costs slowing down, I’m hugely concerned about the impact that this will have across our city.

“I’m committed to doing all I can to provide support Londoners but with increasing numbers struggling to get by and food and energy prices spiralling out of control, more urgent action is needed.

“With the prospect of a bleak winter ahead, the Government must not neglect the needs of those in our capital. Ministers must act now to help prevent this cost-of-living crisis becoming a national disaster.”

Speaking about the urgency of the situation, Katherine Hill, Strategic Project Manager, 4in10 London’s Child Poverty Network, said, “Amidst the worst cost-of-living crisis we have seen for decades, families living on the lowest incomes are under the acute pressure. As prices continue to spiral, many of London’s children are at risk of being denied their basic rights to a safe, warm home and enough healthy food. The Government must respond with compassion and urgently take action to protect families from effects of the rising prices and fix the broken safety net that ought to be there to protect them.”

The Mayor of Newham, Rokhsana Fiaz OBE, added,“We are already distributing the most amount of food of any Council in the UK, highlighting how real this crisis is. Through our collaboration with The Felix Project, 50 tonnes of surplus food is being given to the most vulnerable households in Newham by our voluntary, community and faith groups, exposing the reality of the crisis that households in our borough face. Instead of healthy and nutritious surplus food going to waste, we are using it to keep our families and children fed. The government needs to act now with urgency to give people in Newham and London a lifeline and hope.

“In Newham, many of our families are facing catastrophic consequences because of the cost-of-living crisis and all the while the government remains inert. Our families are struggling to get by, with more and more needing support from our Newham Food Alliance network of food banks as well as welfare advice. In these most difficult of times, Newham’s cost of living crisis response will have to accelerate to contend with the emergency we face, and government must provide us with the money we need to stop families falling off the cliff edge.”

Head of policy and research at the Trussell Trust, Polly Jones adds, “Rising food and fuel costs are affecting us all, but for families on the very lowest incomes in London this crisis means facing impossible decisions between putting food on the table or buy school uniform. Too many people are being left with no option but to use a food bank because their money simply won’t stretch. Food banks in our network are already telling us about soaring levels of need in recent months, including from people who are working, as more and more households are pushed deeper into poverty. That’s why we’re urgently calling on the UK Government to deliver a long-term commitment in the social security system to ensure everyone can afford the essentials in life, like food.”

“Deaf and Disabled Londoners are being hit hard by increases in food and fuel costs,” said Svetlana Kotova, Director of Campaigns and Justice at Inclusion London. She adds, “Some of us are already paying more than £500 per month in energy bills and this situation will get worse with energy costs rising further in October. Even before this cost-of-living crisis, we faced higher energy bills than non-disabled people because we often need to run the heating more to cope with lower mobility or prevent severe illness due to weakened immune systems, and to charge essential medical and mobility equipment.

“Thousands of us are being pushed into debt and poverty and are forced to choose between heating and eating. This is catastrophic but it doesn’t have to be this way. It is vital that the Government faces up to this crisis and urgently increases benefits in line with inflation so that people have enough money to live on.”