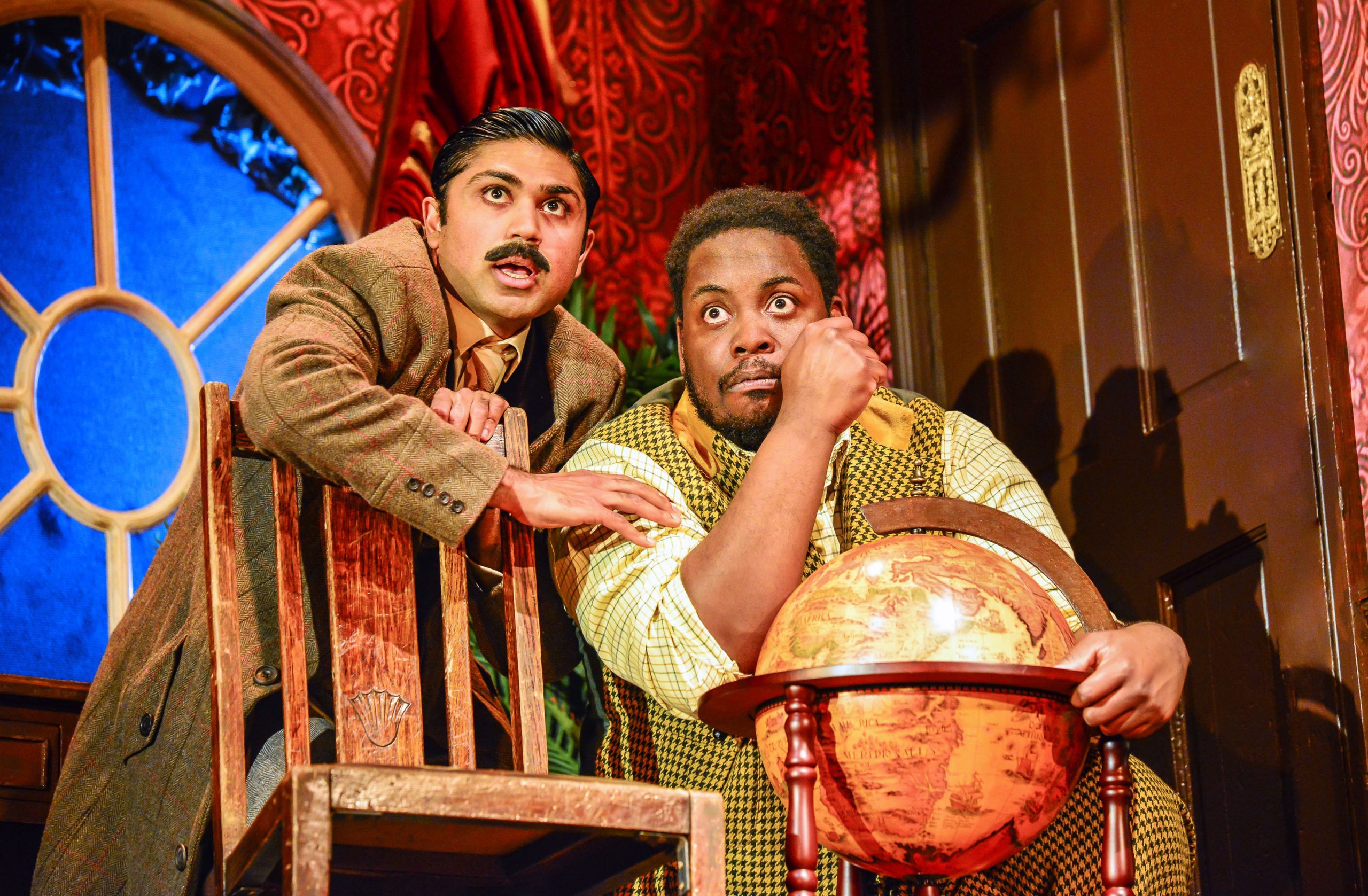 HUGELY popular theatre production The Play That Goes Wrong is the longest running comedy in central London’s West End and is beautifully blundering its way through an eighth year of entertaining enthralled audiences.

The laughter-filled show revolves around a company’s disastrous attempt to put on a play, where everything that can possibly go wrong does. It has been performed to audiences of more than two million and licensed to 30 countries worldwide since it first premiered. It has also won multiple awards and is the longest-running play in the history of the Duchess Theatre, which opened in 1929.

Multiple talented actors have taken on the coveted lead roles across the years and the latest cast includes Mikhail Sen. The acclaimed actor, who played a key character in the BBC TV production A Suitable Boy, adds to his impressive body of work with the prominent role of Chris Bean, the director of the Cornley Polytechnic Amateur Dramatic Society. Sen is clearly enjoying being part of such a big West End production and was happy to speak to Eastern Eye about his interesting acting journey and the joys of joining The Play That Goes Wrong.

What first connected you to acting?
Home – my parents were actively involved in amateur theatre, and would rehearse after work. Since I was an only child, they used to take me along to rehearsals. I grew up with theatre, so being surrounded by a bunch of wonderfully talented (and slightly eccentric) thespians definitely had something to do with me becoming an actor.

Which of your projects have been closest to your heart?
In terms of my screen work, A Suitable Boy will always be closest to my heart. The book was given to me by my grandparents on my 15th birthday and their inscription was, ‘To our suitable boy.’ The fact that I play one of the suitors in the screen adaptation is very serendipitous. In terms of theatre, The Play That Goes Wrong has a very special place. To play a lead role in the West End is a dream come true for me.

Which role or project do you think challenged you most?
I think every role that I’ve played to date has challenged me in some way. Playing Chris Bean in The Play That Goes Wrong has definitely been a journey. It’s an extremely physical part with a fair amount of slapstick and physical gags, coupled with heightened emotion, because the stakes are just so high for Chris. Everything that goes wrong pushes him further and further to the verge of breaking point. While it may be a comedy in the wide shot, zoom in close and you’ll find it’s the greatest tragedy for Chris.

How did you feel landing a role in such an iconic production like The Play That Goes Wrong?
I was very excited, albeit quite nervous. It’s such a successful, brilliantly funny show that’s had audiences laughing for years. When my agent called to say I had got the job, I was both stunned and thrilled at the same time.

For those who have not seen it yet, tell us about the play and your character in it?
The Play That Goes Wrong is about the Cornley Polytechnic Drama Society (think amateur dramatics) who are putting on The Murder at Haversham Manor. It’s a play within a play and everything that can go wrong does go wrong. I play Chris Bean, the director, who’s playing Inspector Carter in The Murder at Haversham Manor.

How much pressure did you feel as an actor who is stepping into such a successful production?
I did feel the pressure a bit because of how successful the show is, but at the same time, we’re doing it afresh with an entirely new cast. Each of us has brought something new and exciting to our roles which takes some of the pressure off because we have found these characters in ourselves.

What is your own favourite moment in the play?
There are so many, but I would say Max’s moment with the phone is probably my favourite.

How does comedy compare to other genres as a performer?
Well, doing a comedy comes with its own set of demands. I’ve learnt so much about timing and how to interact with the audience as well as having to be extremely present and honest. Having a different audience every night is like having a new character you have to play off. That’s what’s really exciting.

What inspires you as an actor?
Wow, good question. Lots of things inspire me. Acting comes from my observations on life and what’s around me. At the moment, it’s the cast and the entire team of The Play That Goes Wrong because they’re brilliant and because the show is now a huge part of my life.

Why do you love theatre?
Because it’s live and immediate and if done well, it has the power to make you suspend disbelief and transport you to different worlds.

According to you, what is the secret of a great performance?
I think the answer to this is, I’m still discovering that. But I believe it lies in doing all the rehearsals and preparation and then forgetting about it, and allowing things to happen from the minute you’re on to the minute you’re off. Easier said than done – I guess that’s what they call being present?

Finally, why should we come watch The Play That Goes Wrong?
It’s a show that’ll have you laughing nonstop for two hours straight. I think it’s exactly what the world needs at the moment.

The Play That Goes Wrong is being staged at Duchess Theatre, 3-5 Catherine Street, London WC2B 5LA. Visit www.theplaythatgoeswrong.com for details.

Nikhil Parmar: I see a lot of myself in my Invisible character, and…