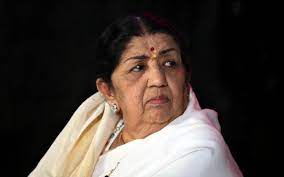 Legendary singer Lata Mangeshkar has been admitted to Mumbai’s Breach Candy Hospital after she contracted Covid-19.

The news was confirmed by her niece Rachna. Speaking to a newswire, Rachna also stated that the 92-year-old singer is doing fine and has been admitted to ICU as a precautionary measure.

She also urged fans to pray for Mangeshkar’s speedy recovery and respect their privacy in this crucial time.

“She is doing fine; has been kept in ICU only for precautionary reasons considering her age. Please respect our privacy and keep Didi in your prayers,” Rachna was quoted saying to ANI.

Born on September 28, 1929, Lata Mangeshkar has rendered her melodious voice to thousands of songs in various languages. She is also known as the nightingale of India.

The singer has been honoured with the Dadasaheb Phalke Award and France’s highest civilian award, Officer of the Legion of Honour, besides multiple national and international awards.

In 2001, the government of India honoured her with Bharat Ratna, India’s highest civilian honour.