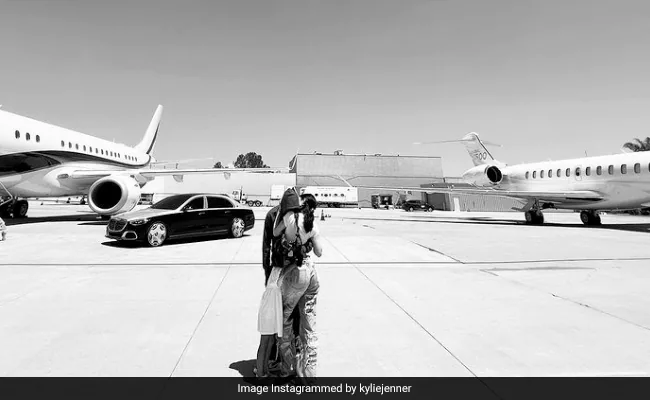 No one can deny the fact that Kylie Jenner and Travis Scott are one of the hottest power couples in showbiz. The duo never fails to step up their power-couple game. They also keep sharing pictures of their expensive possessions on social media. While some people love everything about them, there are many who feel that the duo does it too much at times.

Jenner’s latest IG posts shows a photo of herself and Travis embracing on the tarmac. In the background, we can see both of their private jets, and a two-toned Rolls-Royce in between. The caption reads, “You wanna take yours or mine?”

Jenner bought it in early 2020 for a reported $72.8 million and it is a fully-custom Bombardier Global 7500, the largest and longest-range business jet in the world that offers a variety of layouts that can accommodate up to 19 guests

Dubbed Kylie Air, the plane is a flying extension of The Kardashians on Hulu star’s brand with custom pink details, seats embroidered with KJ, a KYLIE Cosmetics branded carpet, a “Kylie” neon light, and even the name of KylieSkin written on the outside. The jet is 8 feet wide and 59.6 feet long and includes a master suite, two bathrooms, a closet, a rest area, a storage room, and even a bar.

Followers were quick to react to Kylie’s post. Many took to the comment section to lambasted the couple for not only bragging about their wealth but also playing with the environment.

“Maybe take neither and reduce your carbon footprint,” wrote one user, while another added, “Too much flaunting of your wealth when others are barely surviving.”

“Destroying the climate, cute,” wrote the third one. “This display of wealth is unbelievable, so detached from the common person’s struggles,” added fourth.

A user also said, “Rich people unapologetically showing off their contributions to climate change by using a private jet to a 2-hour drive car ride. Yeah, I would be embarrassed to post this.”