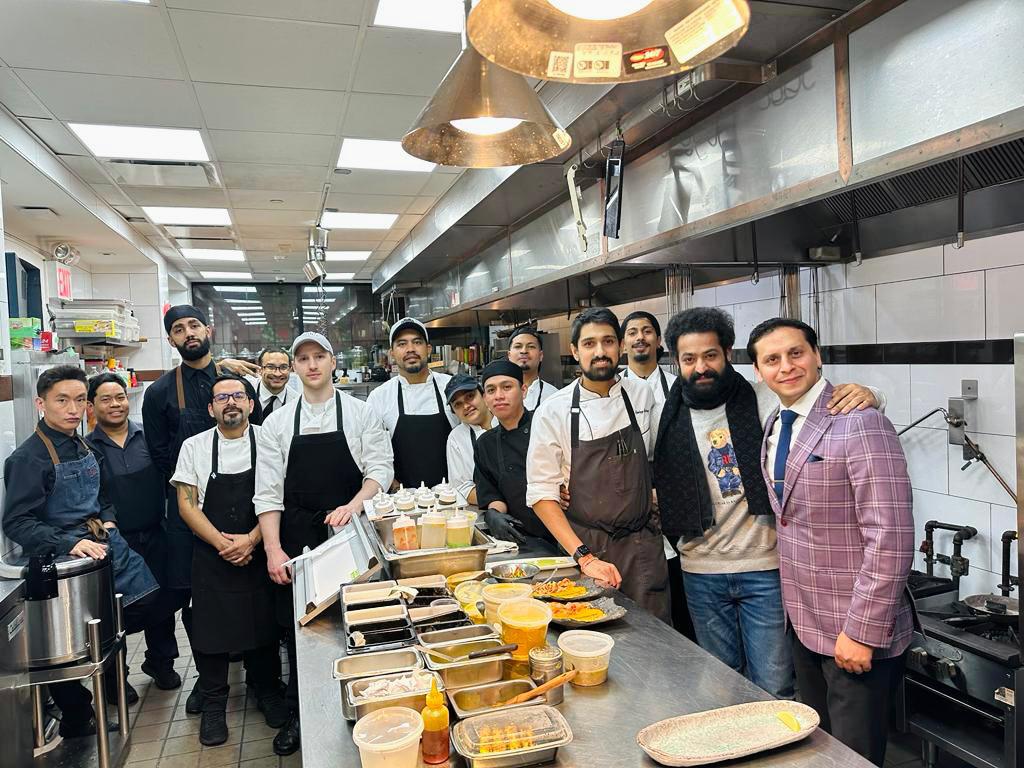 Jr NTR has seen a meteoric rise in his fan following after the thunderous success of SS Rajamouli’s epic period action drama RRR (2022), co-starring Ram Charan. The blockbuster film, which hit screens on March 24, turned out to be a major commercial success at the global box office. Later, its global premiere on Netflix garnered rave reviews from some of the most talented artists from Hollywood, with major praise directed towards Rajamouli’s direction and Ram Charan and Jr NTR’s performances.

Jr NTR is currently on a vacation in the US where he recently visited an Indian restaurant and enjoyed some sumptuous food. Taking to his Instagram Stories on Monday, the young actor shared a photo as he posed with the chef and other staff of the restaurant.

“Had possibly the best Indian food on an international trip. A slice of spice for my taste buds at Junoon, NYC. Amazing!” he wrote on Instagram.

In the photo that has now gone viral, NTR is seen wearing a white sweatshirt, blue denims, and a black muffler as he poses with the restaurant staff with a happy smile on his face.

Meanwhile, the hit song “Naatu Naatu” from RRR has been shortlisted in the Best Original Song Category. The song, composed by M. M. Keeravani and sung by Rahul Sipligunj and Kaala Bhairava, features Ram Charan and Jr NTR.

On the work front, Jr NTR has some exciting projects in the pipeline. He will next be seen in an untitled film, which will be directed by hit filmmaker Koratala Siva. Filming for the same is expected to begin shortly. Additionally, the actor also has one more untitled film in his pocket with KGF fame Prashanth Neel.

Keep visiting this space over and again for more updates and reveals from the glitzy world of entertainment.

‘Deepika is Amar, I am Akbar, John is Anthony’: Shah Rukh Khan’s message on unity…