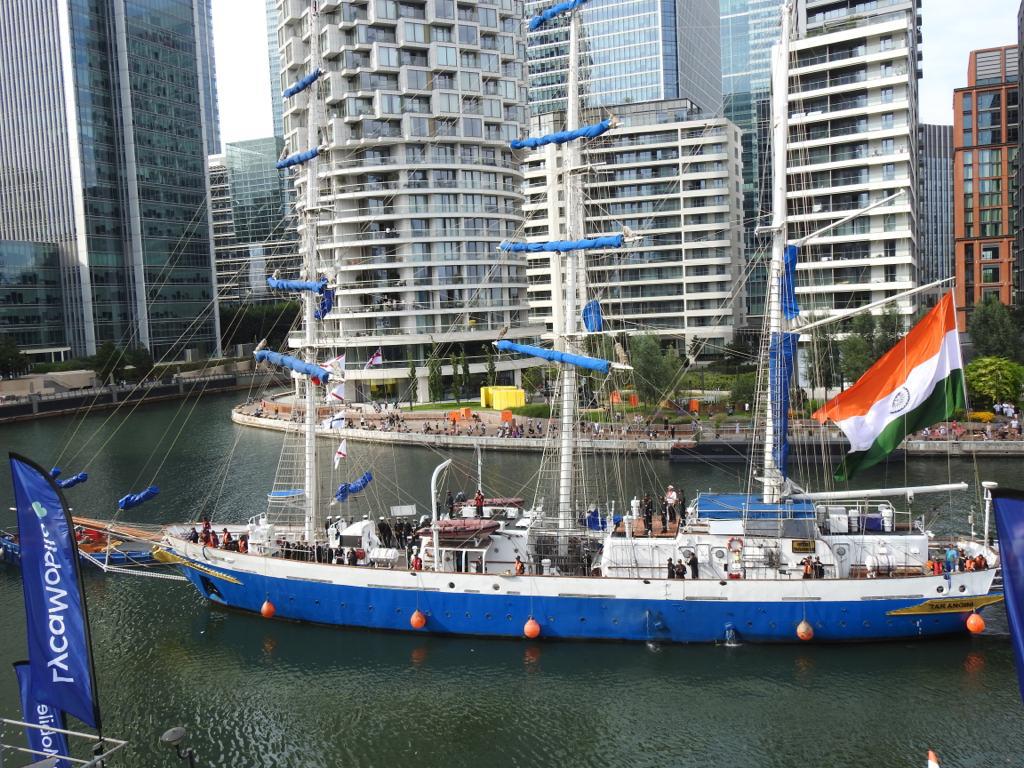 The Made-in-India naval ship INS Tarangini, docked at Thames Quay in east London on its UK voyage to coincide with the 75th anniversary of India’s Independence, has been the focal point of celebrations for the Indian diaspora this week.

Following a grand welcome to the docks for Commanding Officer Praveen Kumar and his crew on Sunday (14), the three-masted barque built in Goa has attracted hundreds of visitors and was also the site of the Indian High Commission in London’s official Independence Day celebrations on Monday (15) evening.

“Tarangini has been undertaking voyages to build bridges of friendship across the globe and her presence in London on the Independence Day of India makes this port call extra special,” said Commodore Anil Jaggi, Naval Adviser at the High Commission.

“The name Tarangini is derived from the Hindi word Tarang, which means waves. Tarangini, therefore, means the one who rides the waves. I can vouch that she does ride the waves but with her share of rolling and pitching. The ship is definitely not for the faint-hearted,” he said.

Giving further details of the 1997-commissioned tall sailing ship, Commander Kumar added: “INS Tarangini is part of the first training squad of Indian Navy’s Southern Naval Command and is based at Kochi in the southern Indian state of Kerala. The primary role of the ship is to foster time-honoured virtues of courage, camaraderie and endurance in officer cadets embarking on a naval career.”

With the tricolour unfurled on its deck, the sail training ship for the Indian Navy formed the backdrop as the national anthem was followed by Punjabi dhol beats and classical dance and music performances on the banks of the river Thames to celebrate Independence Day.