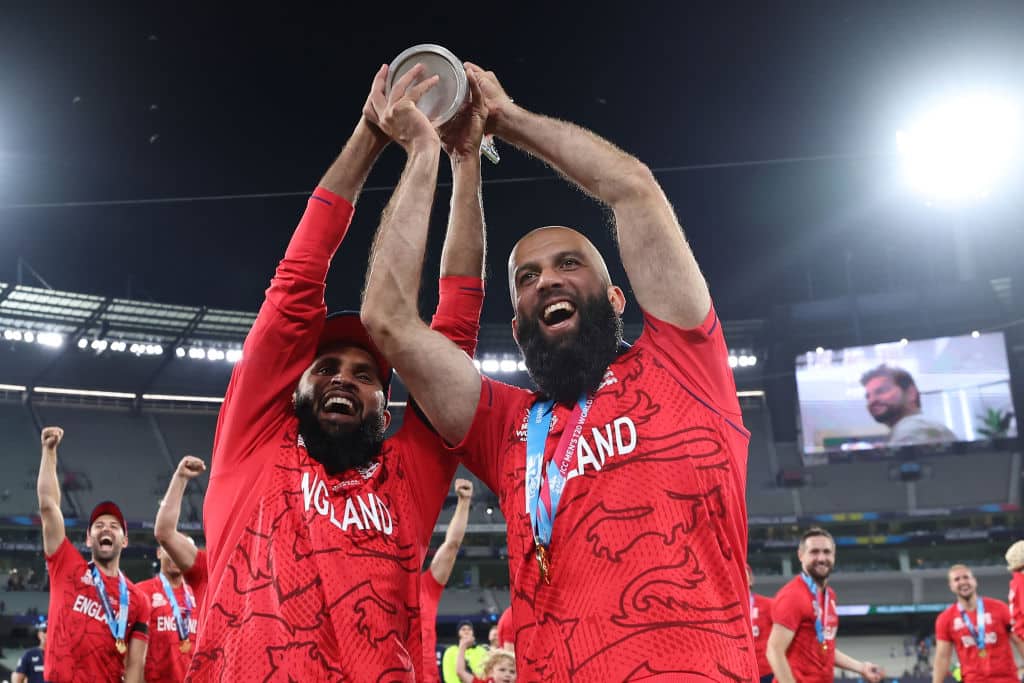 With their recent triumph in Australia, England became the first team to hold the ODI and T20 World Cup trophies in the same cycle.

Eoin Morgan brought about a radical change in mindset and playing style following England’s dismal campaign in the 2015 World Cup and Jos Buttler is carrying forward his legacy.

An important member of the English white-ball team, Moeen feels it is natural for other teams to emulate their aggressive approach to the game. He also drew a parallel with the all-conquering Australian team of the 1990s and early 2000s.

“The template was spoken about long ago. I feel we have become a better team now. Morgs (Morgan) did a brilliant job to change the mindset, which is the hardest part, to put the template there.

“Now we can adapt to different conditions, different teams, use different bowlers in the death and there is flexibility in the batting order. This team is going to get even better,” Moeen told PTI on the sidelines of the Abu Dhabi T10 League.

On the England template which has become the benchmark in international cricket, the 35-year-old said: “Whenever a team is winning, for example, Australia. They used to win all the trophies. Everyone wanted to copy them. Now England has won 50 over and T20 world titles and teams want to copy us.” England had lost to India and South Africa at home earlier this year and Moeen said it was a timely wake-up call for them.

“We played South Africa and India in the summer. They beat us because they were playing the same brand of cricket we were playing.

“So we knew we had to get better and it is a good template to follow. I won’t be surprised if other teams follow that template,” said Moeen, who is captaining the Morrisville Samp Army here.

‘Now even young players can play only two formats’

England had little time to celebrate their T20 World Cup success Down Under as they had an ODI series lined up against Australia three days after the final.

With franchise cricket also growing around the world cricket, the scheduling has become more hectic than ever. Cricketers who play three formats are finding it extremely tough to manage their workload, leading to frequent breaks.

“The problem is if you are a young player, you can’t play all formats now. Earlier you could. Now people are getting pigeonholed into Test or T20 players. I don’t think it is good for them or good for the game.

“In India, Australia and England players get paid quite well but in other countries, they don’t. So at times, they miss out on international cricket for franchise cricket.

“A lot of people say IPL is there (makes the calendar more crowded) but IPL is a massive tournament, you can’t say that.

“For example, a West Indies player rather play in the IPL for money and exposure than (international cricket).”.

‘Mindset in bilateral rubbers and ICC events is very different’

England had lost to India at home but they gave them a hiding in the World Cup semifinals with a 10-wicket win.

England has won two world titles in the last three years while India awaits their first ICC trophy since 2013.

Asked about India’s inability to win global events while they consistently do well in bilateral cricket: Moeen said: “The pressure is different, we felt a lot of pressure this time as we were desperate to win the trophy.

“We also know the other teams are feeling the same pressure. In a bilateral series, there is a lot to consider and you can rest players.

“When it comes to ICC, there are different venues, the pressure is different. That is where the mindset comes into play.

“If you have the team ethos where you don’t worry about getting out, that helps. We played our best cricket against India that day. If you play a certain brand of cricket you will fail but you have to stick with the players as long as you can.” On his T10 experience, Moeen added: “T10 is fast, so there is not much time. You have to go hard from ball one and that can help in improving your game.”