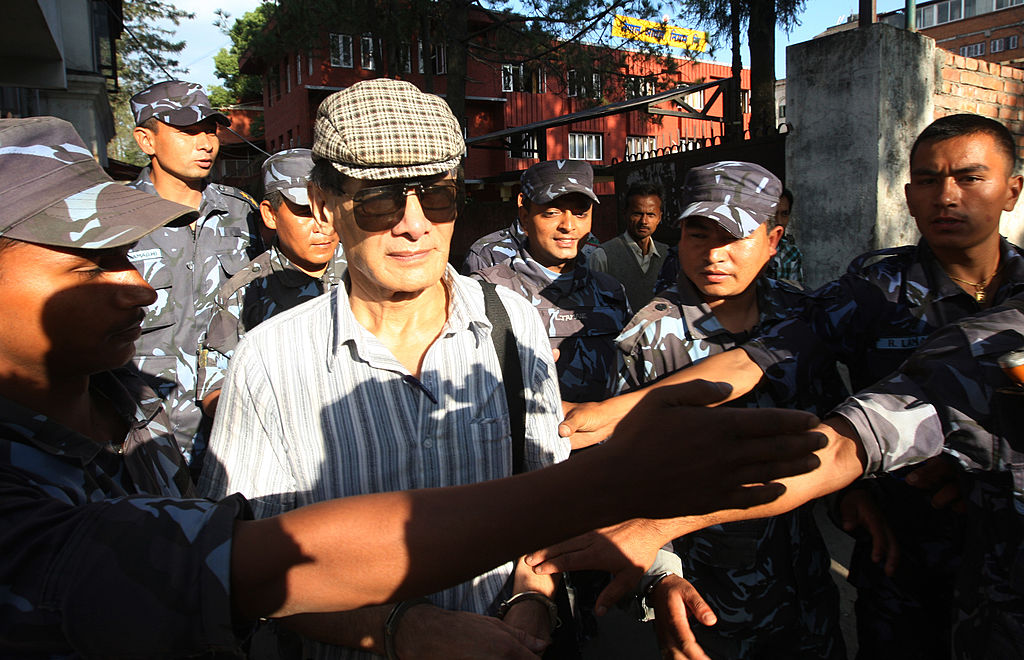 French serial killer Charles Sobhraj (C) is guided by Nepalese policemen towards a waiting vehicle after a court hearing in Kathmandu on May 31, 2011. Charles Sobhraj, a French citizen who is serving a life sentence in Nepal for the murder of an American backbacker in 1975, has been linked with a string of killings across Asia in the 1970s, earning the nickname “bikini killer.” AFP PHOTO/Prakash MATHEMA (Photo credit should read PRAKASH MATHEMA/AFP via Getty Images)

After meeting French serial killer Charles Sobhraj in the prison, his lawyer and Mother in law, Sakuntala Thapa said that she was happy and has great respect for the judiciary.

The French serial killer, also known as Serpent Killer, has been released on the grounds of old age. He has been in Nepali jail on the charge of murdering two American tourists. The court concluded that the 78-year-old should be freed as he has already completed 95 per cent of his jail term.

In the verdict, the supreme court said, “The regulation on prison management envisions a waiver of up to 75 per cent of the jail term of the prisoners over 65 years of age and with good conduct.”

Sobhraj’s lawyers had long been demanding the court’s intervention for clemency. In different petitions, they had demanded a waiver of his jail sentence, citing provisions of Clause 12 (1) of the Senior Citizens Act 2063, according to The Kathmandu Post.

The court also ordered the government to make arrangements for repatriating Sobhraj to his home country within 15 days unless he had to be kept in jail for some other offence.
The notorious criminal with police cases in different countries was convicted of killing the American citizen Connie Jo Boronzich, 29, and his Canadian girlfriend Laurent Carriere, 26, in 1975.

Arrested on September 19, 2003, Sobhraj’s lifetime imprisonment would end on September 18 next year. The French citizen with Vietnamese and Indian parentage committed a string of murders throughout Asia in the 1970s.

Sobhraj, who has been implicated in more than 20 killings, served 21 years in India for poisoning a French tourist and killing an Israeli national, as per The Kathmandu Post.
Sobhraj was also awarded a 20-year jail term in 2014 after being found guilty of a second murder, of a Canadian tourist Laurent Carriere, who was killed in 1975.

The French serial killer was arrested in 2004 after he was first spotted in a Kathmandu casino.