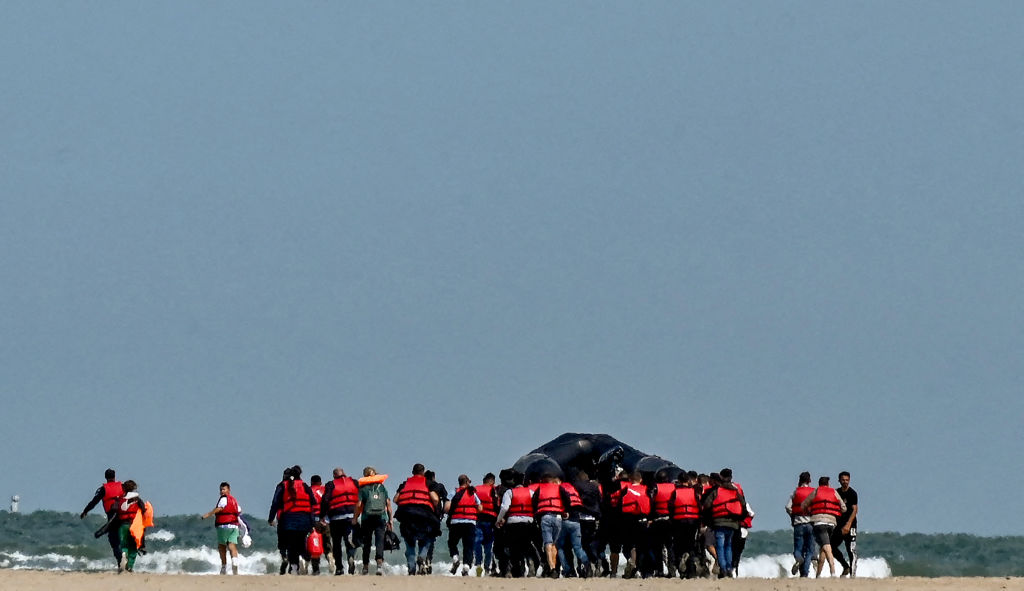 Migrants push an inflatable boat across a stretch of sand towards the water, near Gravelines, northern France, on August 25, 2022, before they attempt to cross the English Channel to Britain. – The number of people crossing the Channel to the UK from northern France in small boats has hit a new high, the government in London said on August 23, 2022. Some 1,295 migrants were detected on August 22, beating the previous single-day record of 1,185 on November 11, 2021, the Ministry of Defence said. The issue has caused a major political headache for the UK government, which promised tighter border controls after leaving the European Union. (Photo by DENIS CHARLET / AFP) (Photo by DENIS CHARLET/AFP via Getty Images)

French police have busted a major people-smuggling ring that has been sending migrants to Britain in dinghies, seizing more than a dozen boats and 700 life jackets in a raid, French officials said Thursday.

The ring, run by Iraqi Kurdish migrants, had a logistics hub in Lille, a northern French city about 100 kilometres (60 miles) from the Channel beaches around Calais used for crossings.

Three Iraqi men have been charged, along with three French suspects after their arrest on Monday.

In what was their biggest ever seizure of equipment, they found 13 inflatable boats, 14 outboard engines, 700 life jackets, 100 pumps and 700 litres (185 gallons) of fuel, Delrieu said.

The group is suspected of having organised 80 Channel crossings over the summer, of which 50 succeeded, with the smugglers netting around 80,000 euros ($80,000) for each one.

The arrests came due to intelligence-sharing between authorities in Belgium, Britain, Germany and the Netherlands, who are all trying to crack down on migrants crossing the Channel by boat.

The original tip-off came after a border guard control discovered a group of French youths carrying inflatables from Germany into the Netherlands.

More migrants have crossed the Channel to the UK from northern France so far this year than in the whole of 2021.

So far this year, more than 30,000 people have been detected crossing the Channel to the UK, fresh government figures showed Thursday. On Wednesday alone, the authorities detected another 667 people.

Britain’s new prime minister, Liz Truss, has faced some criticism from other Conservatives and in right-wing media outlets for not pressing for more French action against the crossings when she met President Emmanuel Macron in New York on Tuesday.

Downing Street said the issue did not come up at their talks on the margins of the UN General Assembly, which instead focused on common ground including Ukraine and energy security.

The crossings are among a host of issues that have badly strained Franco-British relations in recent years.