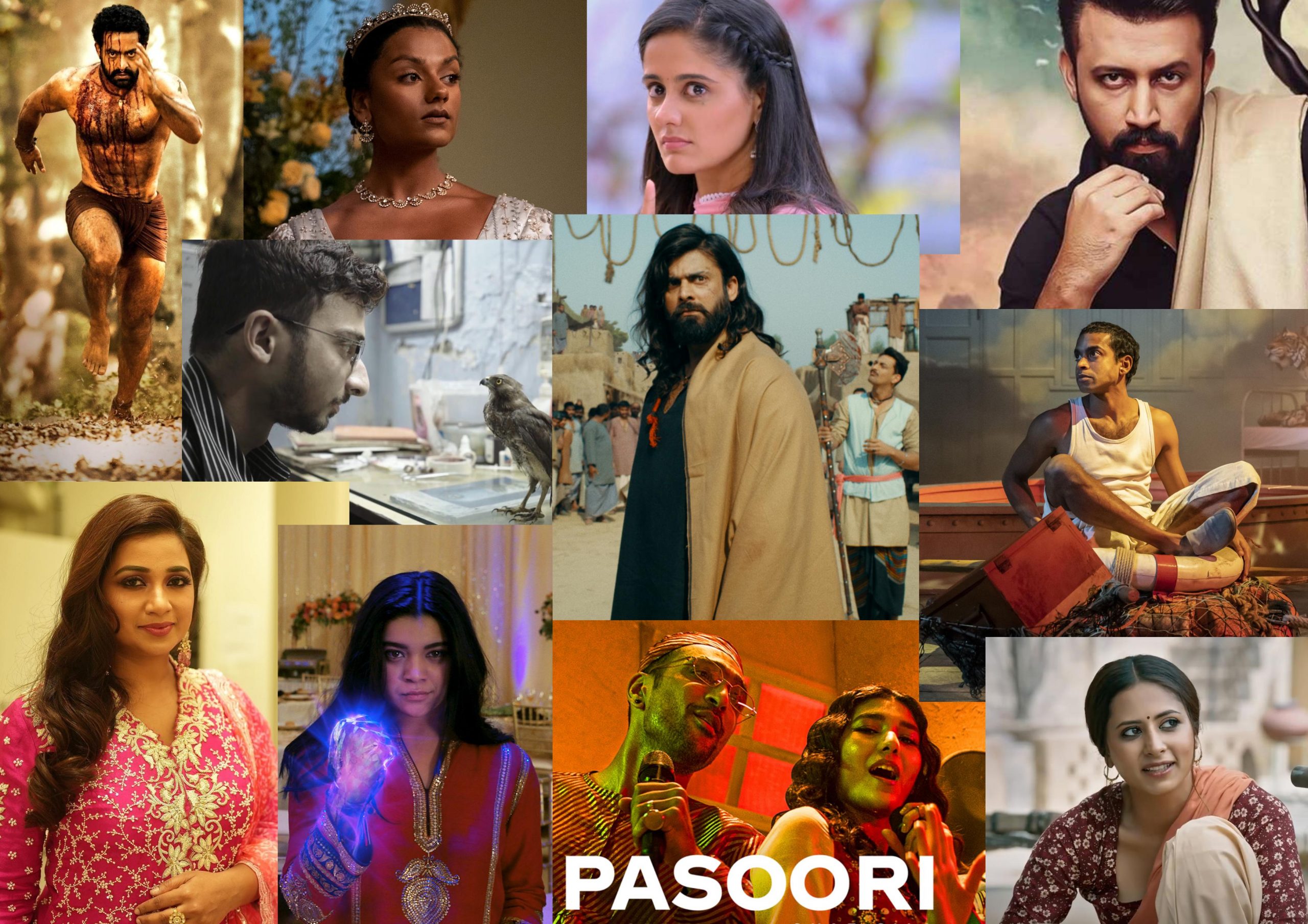 THE world of performing arts quickly moved on from Covid-19 with an amazing array of wonderful work.

Whether it was films, songs, live performances, web serials, stage shows and everything else, top talents made up for lost time and entertained audiences with boundary-breaking projects that offered something new and cool creativity from artists on the top of their game.

Eastern Eye decided to celebrate the best 2022 had to offer with the annual Eye Spy awards, with extra points being given for horizon-expanding work.

The once-in-a-generation global juggernaut broke every Pakistani box-office record. The game-changing film remake of 1979 Lollywood cult classic Maula Jatt redefined an entire industry and even outperformed every Bollywood release at the UK box office in 2022. It raised the bar to a new level with every aspect, from a gripping storyline to the technical filmmaking, sets and stand-out performances. Fawad Khan, Hamza Ali Abbasi and Mahira Khan led a great cast in the gripping revenge story of warring tribals.

The Indian superstar delivered a dazzling performance in mega-hit movie RRR. He brought a great intensity to his role as a courageous tribal man who goes on a mission to rescue a young girl from British colonialists and eventually takes them on. The multi-layered performance mixed up raw power with emotion and connected with cross-cultural audiences. It is no surprise that there has been a strong buzz about him receiving a history-making Best Actor nomination at the forthcoming Oscar awards.

Memorable performances from Sargun Mehta played a huge part in powering the Punjabi film industry to even greater heights in 2022. Although she was electrifying in Saunkan Saunkne and Ghund Kadh Le Ni Sohreyan Da Pind Aa Gaya, the actress really showed off her brilliance in one of this year’s finest films, Moh. Her portayal in a challenging role in the drama was described as pure poetry, with power, presence and emotional depth, and confirmed her as the queen of Punjabi cinema.

The hit drama serial about a downtrodden homemaker finding a new lease of life continued to top the ratings in India and powered the show towards 800 episodes. A big part of its success has been relatable characters and a terrific title role portrayed by actress Rupali Ganguly. The globally popular soap opera destroyed all the competition, from reality TV shows to new serials, and showed why it was the best of 2022.

A young actress will usually leave a television drama series when there is a time leap or if they have to play an older character, such as a mother, but Ayesha Singh did all that and more in Ghum Hai Kisikey Pyaar Meiin this year. The 26-year-old was just marvellous with her perfectly pitched performance of a young woman at different times in her life. She went through all the emotions, injected power into every scene and carried the hit drama serial on her shoulders, even after suffering a serious injury.

The Pakistani pop superstar made a powerful TV acting debut with a lead role in Sang-e-Mah. The magically voiced star took on the Hamlet-inspired hit drama serial, complete with complex dialogues, with effortless ease and showed great screen presence. It began an exciting new chapter for the multi-talented star. A special mention also goes to Asif Raza Mir for his performance as an underworld boss in hit British crime drama Gangs Of London.

The stunning six-episode adventure about a teenage Muslim girl getting superpowers had everything from a horizon-expanding story to a brilliant lead performance by talented newcomer Iman Vellani. The path-breaking Disney+ show was wonderfully directed, had a superb soundtrack and great cameos from stars including Farhan Akhtar. It concluded with a great set up that will see the young heroine take the leap to films with The Marvels, set to be released in 2023.

He may have had a largely disappointing year as a lead in films, but that certainly wasn’t the case for Ajay Devgn in his web debut Rudra: The Edge of Darkness. The official Indian remake of British detective series Luther saw him add real fire to the incendiary role of a psychologically damaged detective trying to solve cases. His intense performance was a major highlight in the decidedly dark thriller and showed off an impressive acting range.

The second season of historical romantic drama Bridgerton became the most-streamed English-language season of a Netflix show, and a stunning turn from Simone Ashley played a major part in that success. She embodied regal charm in the role as Kate Sharma and offered up an empowered character that has never been seen before. Her star-making turn, filled with great moments, broke new cultural ground for ethnic minority artists and shattered a glass ceiling.

There was a reason why the Life Of Pi stage show won multiple honours at the Laurence Olivier Awards this year, including Best New Play and Best Actor. The stunning theatre adaptation of Yann Martel’s award-winning novel of the same name had everything from fabulous stage design to eye-catching puppetry and pitch-perfect performances. The story
of a sole human survivor of a shipwreck stuck on a lifeboat with a Bengal tiger has been a roaring success.

The British pop sensation’s fifth album being described by some reviewers as her best yet was perhaps the greatest compliment it received. The singer-songwriter, who has always set high standards, delivered a big, brash and bold collection of songs that beautifully blended diverse pop genres. She tackled hard-hitting subjects and packaged them neatly into a commercial album that was entertaining, rule-breaking and the best of 2022 by an artist of south Asian heritage.

One of the greatest ever series of popular music show Coke Studio was loaded with great songs, but one that stood out was Pasoori by Shae Gill and Ali Sethi. The superhit duet became the most viral south Asian song of 2022 around the world. The catchy song popped up everywhere this year and brought people together. It was so popular that the two singers were soon booked for international shows, including a London concert.

The undisputed queen of Indian music once again ruled supreme with songs in diverse languages, genres, and styles. The prolific singing star was unstoppable, as she showed off her impressive versatility with popular songs and huge sell-out concerts at arenas around the world. She continued to cross new musical frontiers and set very highs standard for others to meet.

Best Documentary: All That Breathes

An appetite to watch real stories saw another year of compelling documentaries, and the best was this visually captivating film. The real-life story of two Indian brothers struggling to run a home-grown hospital for birds in Delhi won multiple awards at big festivals globally, including at Sundance and Cannes. Apart from the central story, the critically acclaimed film also shone a light on real problems like big city pollution.

After a relative slump in recent years, the ace music producer struck back with seriously good songs throughout the year. The standout release was his splendid soundtrack for blockbuster movie Ponniyin Selvan: I, which was released in multiple languages. The multi-award-winning maestro showed that he has lost none of his magic and can still boss the music scene.

Whether it was hosting hit TV shows, acting, or performing sold-out shows around the UK, there was no British Asian comedian who came close to this award-winning funny man. By putting his brilliant brand of humour on unique platforms, the British Sri Lankan sensation entertained audiences of all ages and cultures. The indemand star has blazed a trail so others can follow in his footsteps.

Audiences turned out in force to see live music at the huge number of sold-out shows across the UK this year. Although world-class performers like Shreya Ghoshal, Diljit Dosanjh, Rahat Fateh Ali Khan and Neha Kakkar delivered memorable concerts, Arijit Singh was a class apart. Unlike others who had support acts or took an interval break, the Indian musician was on stage for more than three hours and sang his heart out in performances loaded with great visuals.

Online content creators have gained huge followings across different platforms, and some of the most popular remain those starring in comedy videos. That Indian Chick, also known as Vagmita, showed less can be more with intelligent laughter-generating comedy clips on Instagram, powered by turbo-charged Hindi-language monologues. She was fantastically funny and filled social media with her witty wisdom.

THERE were plenty of surprises in the entertainment industry this year.

It added an extra interesting dimension to 2022 and, in some cases, laid a strong foundation for greater things in the future. In no particular order, here are 10 moments that left us amazed in different ways.

Oscar win: British actor Riz Ahmed followed up a Best Actor nomination at the 2021 Oscars by winning an Academy Award for his short film The Long Goodbye. The stunning win in the Best Live Action Short Film category was celebrated by south Asians globally.

Vikram success: The Tamil language thriller headlined by Kamal Hasaan became the highest grossing Indian film of 2022 in the UK. It outperformed movies in other languages, including every Bollywood release, and was the only one to cross £1.5 million at the British box-office.

Ms Marvel music: Most people were ready for the special effects-laden superhero series from Marvel to be eye-catching and path-breaking, but what no one expected was how great its music would be. The stunning soundtrack included everything from Pakistani classics to cutting-edge contemporary songs by amazing young Asian artists.

Taboo-busting Joyland: The Pakistani movie about a young man who falls for a transgender dancer took the international circuit by storm. The genuinely different drama is Pakistan’s entry at the 2023 Oscars and has a strong chance of becoming the first from the country to get a nomination, or even win an Academy Award.

Stunning short: Oscar-qualifying short film Moshari was like nothing that had come out of Bangladesh before. This dystopian drama about a monstrous entity lurking in the shadows won awards and delighted audiences at festivals around the world. It added a new dimension to Bangladeshi cinema and is being turned into a feature film.

Bad Santa: Kal Penn was a surprise choice to play a villainous Father Christmas in the Disney+ comedy series The Santa Clauses and did it really well.

Amazing Alia: Whether it was her mature performance in Gangubai Kathiawadi, marrying Ranbir Kapoor, signing her first Hollywood film Heart Of Stone opposite Gal Gadot or having her first child, the actress spent the year surprising everyone.

Surprise splits: There was plenty of news about celebrity relationships throughout 2022, but the one that took everyone by surprise was Pakistani power couple Sajal Ali and Ahad Raza Mir getting a divorce after two years of marriage. And reports that Pakistani cricketer Shoaib Malik and Indian tennis ace Sania Mirza were also splitting up shocked everyone.