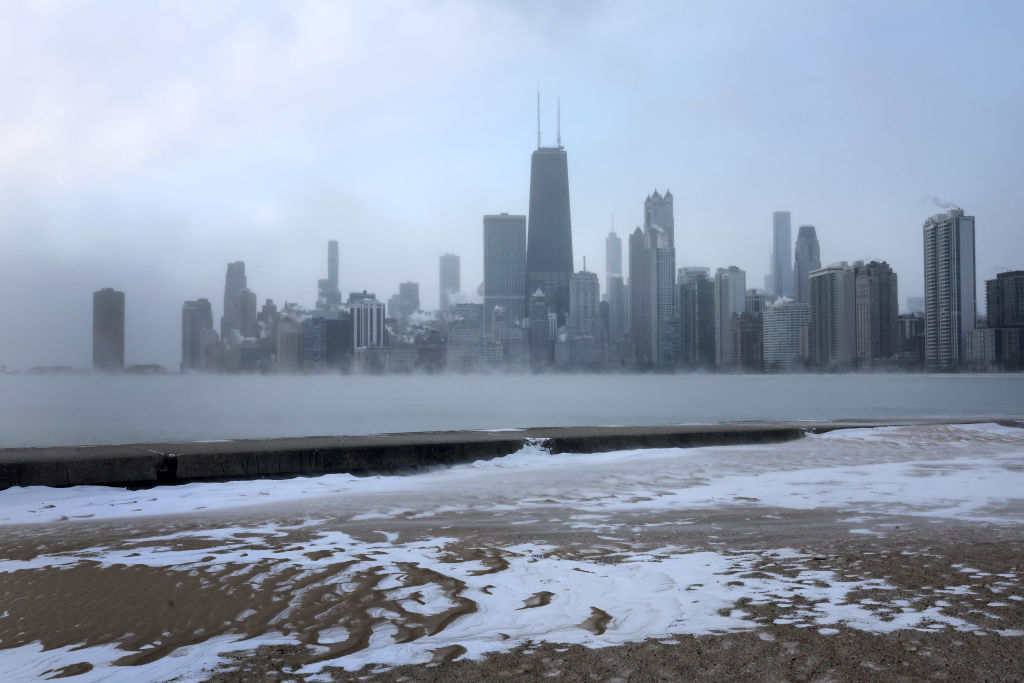 CHICAGO, ILLINOIS – DECEMBER 23: Vapor rises from Lake Michigan near downtown as temperatures hover about -6 degrees on December 22, 2022 in Chicago, Illinois. Sub-zero temperatures are expected to grip the city for the next couple of days with wind chill temperature dipping as low as -40 degrees. (Photo by Scott Olson/Getty Images)

More than a million US power customers were in the dark Friday as a “bomb cyclone” winter storm walloped the country, closing highways, grounding flights and causing misery for Christmas travellers.

Heavy snow, howling winds and air so frigid it instantly turned boiling water into ice took hold of much of the nation, including normally temperate southern states.

Over 200 million Americans were under weather warnings, as wind chills sent temperatures down as low as -55 Fahrenheit (-48 Celsius), according to the National Weather Service (NWS).

In Hamburg, New York, 39-year-old Jennifer Orlando hunkered down with her husband.

“I can’t see across the street,” she told AFP. “We’re not going anywhere.”

Her power was out for four hours after a vehicle slid into a power line on the highway, she said.

The biting cold is an immediate concern for hundreds of thousands of electricity customers who were without power, according to tracker poweroutage.us.

In El Paso, Texas, desperate migrants who had crossed from Mexico huddled for warmth in churches, schools and a civic centre, Rosa Falcon, a school teacher and volunteer told AFP.

But some still chose to stay outside in -15 Fahrenheit temperatures because they feared attention from immigration authorities, she added.

In Chicago, Burke Patten of Night Ministry, a nonprofit dedicated to helping the homeless, said: “We’ve been handing out cold weather gear, including coats, hats, gloves, thermal underwear, blankets and sleeping bags, along with hand and foot warmers.”

Major Caleb Senn, Chicago area commander for the Salvation Army, said the organization had centers open for people to shelter from the fierce weather.

“Some of the people we’re seeing right now, they’ve just become homeless this year,” he said.

“Some of these people are actually frightened. This is the first time they’ve been in the elements without someplace to go.”

Some, however, were taking the biting cold in their stride.

Jennifer Campbell, of Caledon, Ontario, told AFP: “I think every few years we get some big storms and we just adjust. We are Canadians, that’s the way we do it.”

At least two traffic fatalities were reported in Oklahoma Thursday. Andy Beshear, governor of Kentucky, confirmed three in his state.

In Ohio, a 50-vehicle pile-up left at least one person dead, according to local media, while in Michigan an accident involving nine tractor trailers snarled traffic.

Drivers were being warned not to take to the roads — even as the nation reached what is usually its busiest time of year for travel.

“This is an epic, statewide hazard,” New York Governor Kathy Hochul said at a press briefing.

“The roads are going to be like an ice skating rink and your tires cannot handle this.”

Around 5,000 US flights were canceled Friday and another 7,600 delayed, according to flight tracking website FlightAware, many at international hubs in New York, Seattle and Chicago’s O’Hare.

The knock-on effects were spreading misery even to travelers arriving in balmy Los Angeles.

Christine Lerosen told ABC 7 she had been unable to find a flight out of Vancouver.

“I had to get my brother to drive me down to Seattle — had to book a flight out of Seattle to go to Denver, to fly here. My Seattle flight was delayed, my Denver flight was delayed and now they lost my luggage,” she said.

By Friday afternoon, the storm had acquired the status of “bomb cyclone” after air pressure dropped precipitously over 24 hours.

Bomb cyclones produce heavy rain or snow. They can also cause flooding at coasts, and generate hurricane-force wind.

Meteorologist Kelsey McEwen in Toronto tweeted that waves of up to 26 feet (eight meters) have been reported in Lake Erie, while in Ohio’s Fairport Harbor, winds gusted to 74 miles (120 kilometers) per hour, the NWS tweeted.

Rich Maliawco, lead forecaster for the NWS in Glasgow, Montana, where wind chill plunged to -60 Fahrenheit overnight, warned the weather was extremely dangerous.

“With these kinds of wind chills, if you’re not wearing those warm layers… unprotected skin can get frostbite in less than five minutes,” he said.

Conditions were cold enough for people to post videos of themselves carrying out the “boiling water challenge,” where boiling water is thrown into the air and instantly freezes.

“We created our own cloud @ -17° F (-27° C) at the #Missoula International Airport,” tweeted NWS Missoula in Montana.

Washington understands impact of job cuts: White House on job cuts in major US IT…

Three Indian-Americans take oath as county judges in US