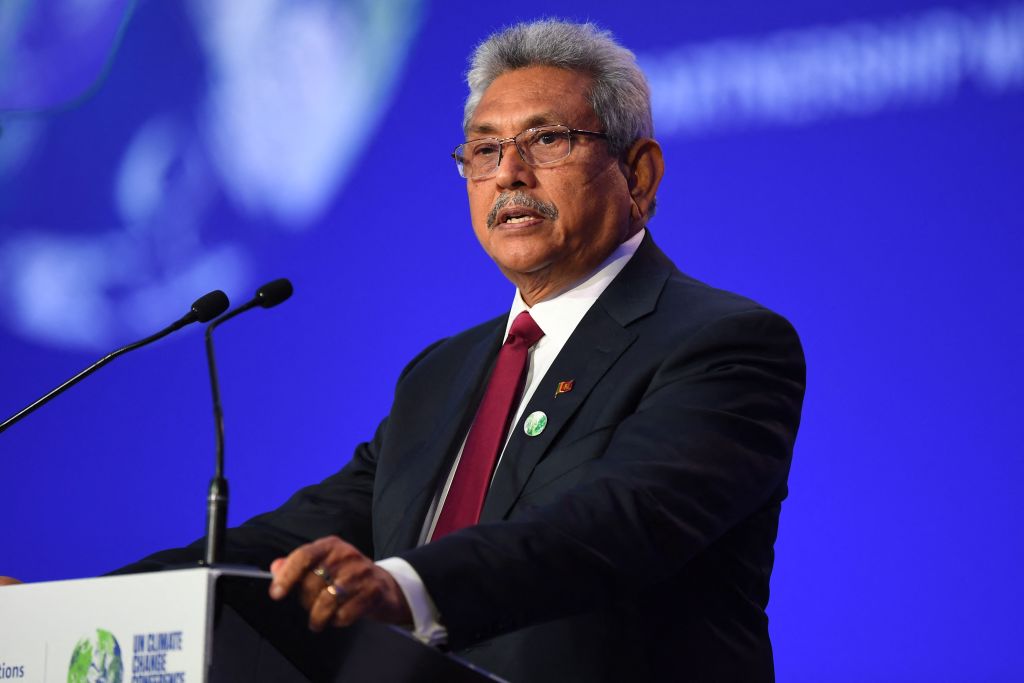 Sri Lanka’s President Gotabaya Rajapaksa presents his national statement as part of the World Leaders’ Summit of the COP26 UN Climate Change Conference in Glasgow, Scotland on November 1, 2021. – COP26, running from October 31 to November 12 in Glasgow will be the biggest climate conference since the 2015 Paris summit and is seen as crucial in setting worldwide emission targets to slow global warming, as well as firming up other key commitments. (Photo by ANDY BUCHANAN / POOL / AFP) (Photo by ANDY BUCHANAN/POOL/AFP via Getty Images)

A South Africa-based rights group has submitted a criminal complaint to the Attorney General of Singapore requesting the arrest of former Sri Lankan President, Gotabaya Rajapaksa, for alleged war crimes.

Lawyers from the International Truth and Justice Project (ITJP) submitted a 63-page complaint that argues that Rajapaksa committed grave breaches of the Geneva Conventions during the civil war in 2009 when he was secretary of defence and that these are crimes subject to domestic prosecution in Singapore under universal jurisdiction. The legal complaint states that Gotabaya Rajapaksa committed violations of international humanitarian law and international criminal law during the civil war in Sri Lanka.

“These include murder, execution, torture and inhuman treatment, rape and other forms of sexual violence, deprivation of liberty, severe bodily and mental harm, and starvation,” ITJP said in a statement.

Rajapaksa fled to Singapore via the Maldives in mid-July after months of mass protests calling for his resignation. The unrest was triggered due to the economic collapse of the country. Ranil Wickramasinghe has been elected as the new President of Sri Lanka.

“The economic meltdown has seen the government collapse but the crisis in Sri Lanka is really linked to structural impunity for serious international crimes going back three decades or more,” said the ITJP’s executive director, Yasmin Sooka. “This complaint recognises that it’s not just about corruption and economic mismanagement but also accountability for mass atrocity crimes.”

The ITJP submission to the Attorney General calls for the arrest, investigation and indictment of Gotabaya Rajapaksa. It outlines the former President’s role as a former military commander in 1989, in charge of a district where at least 700 people disappeared under his watch. The document focuses mainly on his role as Sri Lanka’s secretary of defence, during the end of the country’s civil war in 2009.

According to an ITJP, detailed evidence is adduced to show that Rajapaksa issued direct orders by telephone to his former military buddies whom he appointed as Major Generals to command the offensive and watched the conduct of the battle live on surveillance and drone footage in headquarters.

The rights group said that the dossier submitted by them contains accounts of repeated and deliberate strikes by the army on civilians sheltering in earthen bunkers, killed while queuing for food or receiving first aid treatment in hellish conditions lying on the floor of makeshift clinics.

“It details how the decision to expel aid workers from the war zone in September 2008 was Gotabaya Rajapaksa’s and designed to hide the extent of human suffering from the eyes of the world. Even United Nations offices in the war zone were repeatedly hit by the Sri Lankan air force to encourage aid workers to flee and yet Gotabaya Rajapaksa himself boasted that the air force could pinpoint targets; he said they surveilled targets and planned and reviewed every air strike,” ITJP said.

According to the rights group, Gotabaya Rajapaksa’s ministry was in charge of approving humanitarian deliveries to the war zone and although he sat in meetings with humanitarian agencies who repeatedly warned that the civilian population were in desperate need of life-saving medicine and food, he denied permission to send in supplies.