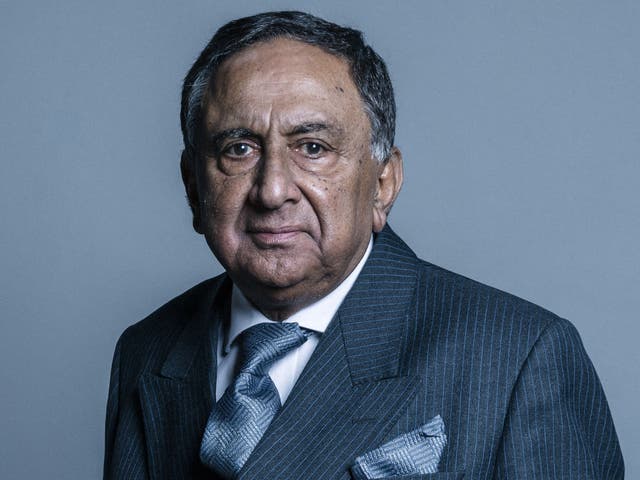 A successful businessman and a writer, Lord Sheikh achieved many things during his lifetime. He founded the Conservative Muslim Forum and chaired it for several years.Currently, he is the president of the Forum.

The peer has been a visiting lecturer at Universities and also acts as an advisor. He promoted educational and cultural ties between the UK and other countries.

Originally from Punjab, Lord Sheikh was born in Kenya and brought up in Uganda.

His family arrived ‘penniless’ in the UK in 1972 after being expelled from Uganda by General Idi Amin. His father was a wealthy businessman, who made his money from dealing with items like coffee and cotton. He was also the owner of several properties in Uganda.

“We arrived here penniless. General Idi Amin took everything from us, except what we had in our minds. Because we were doing very well in Uganda, we came here and we were prepared to work hard,” Lord Sheikh said about early days in UK.

“What we did in this country, was perhaps what we had learned in Uganda and that is to use our brains, to use our initiative, work hard, and we have done very well.”

Lord Sheikh started working for an insurance broking organisation called Camberford Law. He ended up owning it and transformed it into a public company, which provided risk facilities for 1,800 brokers. It went on to win 12 major awards over the course of three years.

Lord Sheikh was elevated to the House of Lords in 2006. He has travelled extensively overseas and visited a number of countries to expand trade between them and the UK.

He is a Patron of several Muslim and non-Muslim organisations and is actively involved in strengthening relationships between various racial and religious groups.

Lord Sheikh has founded and co-chairs the All Party Parliamentary Group (APPG) for Islamic and Ethical Finance in British Parliament.

He is co-chair of the APPG on Turkey and the Prevention of Genocide and Crimes Against Humanity. He is also a vice-chair of the APPGs on Bangladesh, Sri Lanka, Nepal, Kazakhstan and Tajikistan.

His first book on the Maharaja Ranjit Singh was very well received, and his second, An Indian in the House, is on the first four Indians who were members of British Parliament. He has nearly completed his third, a historical novel.

He founded the charity the Sheikh Abdullah Foundation, which is named after his father, and was patron of the charity, Orphans in Need.

Lord Sheikh has been added to the 2021 Indiaspora Government Leaders List which recognises 200 government leaders of Indian heritage in 15 countries around the world.

His funeral took place on Friday (23) at Croydon Mosque and Islamic Centre, with a burial at Greenlawn Memorial Park.