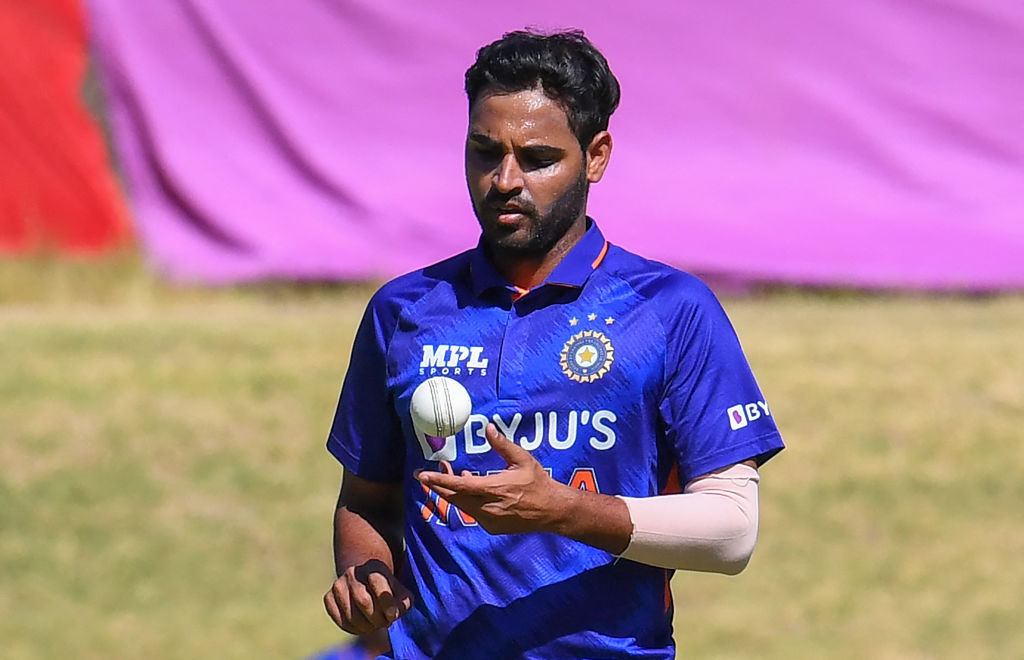 INDIA star bowler Bhuvneshwar Kumar wreaked havoc on the England batting lineup as he went on to become the first Indian bowler to bowl 500 dot balls in the T20s powerplays with his stunning spell.

Bhuvneshwar gave India a perfect start defending 171 as the 32-year-old senior pacer removed English opener Jason Roy for a golden duck of the first ball of the England innings during the second T20I in Birmingham on Saturday (9).

The match also saw Bhuvneshwar become the first bowler to bowl 500 dot balls in the history of T20Is ahead of West Indies’s Samuel Badree who has 383) balls in his tally and New Zealand’s Tim Southee on the third spot with 368.

Coming to the match, the Indian pace attack led by Bhuvneshwar Kumar and Jasprit Bumrah feasted on English batters and delivered tight bowling performances to help the visitors clinch the T20 series after bundling out England for 121 runs within 17 overs in the second T20I at Birmingham on Saturday.

England pacers, led by Richard Gleeson and Chris Jordan, dominated the Indian batters in the second T20I here at Birmingham as Men in Blue posted a competitive 170/8 in their 20 overs, with efforts from captain Rohit Sharma (31) and Ravindra Jadeja (46*) proving extremely valuable for the visitors.

England had an extremely disappointing day with the bat. The highly-attacking batting line-up could not live up to its hype again, fizzling out in front of Indian pacers. Indians moved on from their slightly-off batting performance in the first half to bundle out hosts for 121 and capture the series.

Only Moeen Ali (35) and David Willey (33*) could put up some decent scores next to their names. The foundation for this amazing exhibition of bowling was laid by Bhuvneshwar Kumar in the powerplays.

Both the teams will now be squaring off for the third and final T20I of the three-match series on Sunday (10) at Nottingham.

Boys are young, but played maturely: Shikhar Dhawan after series win over West…