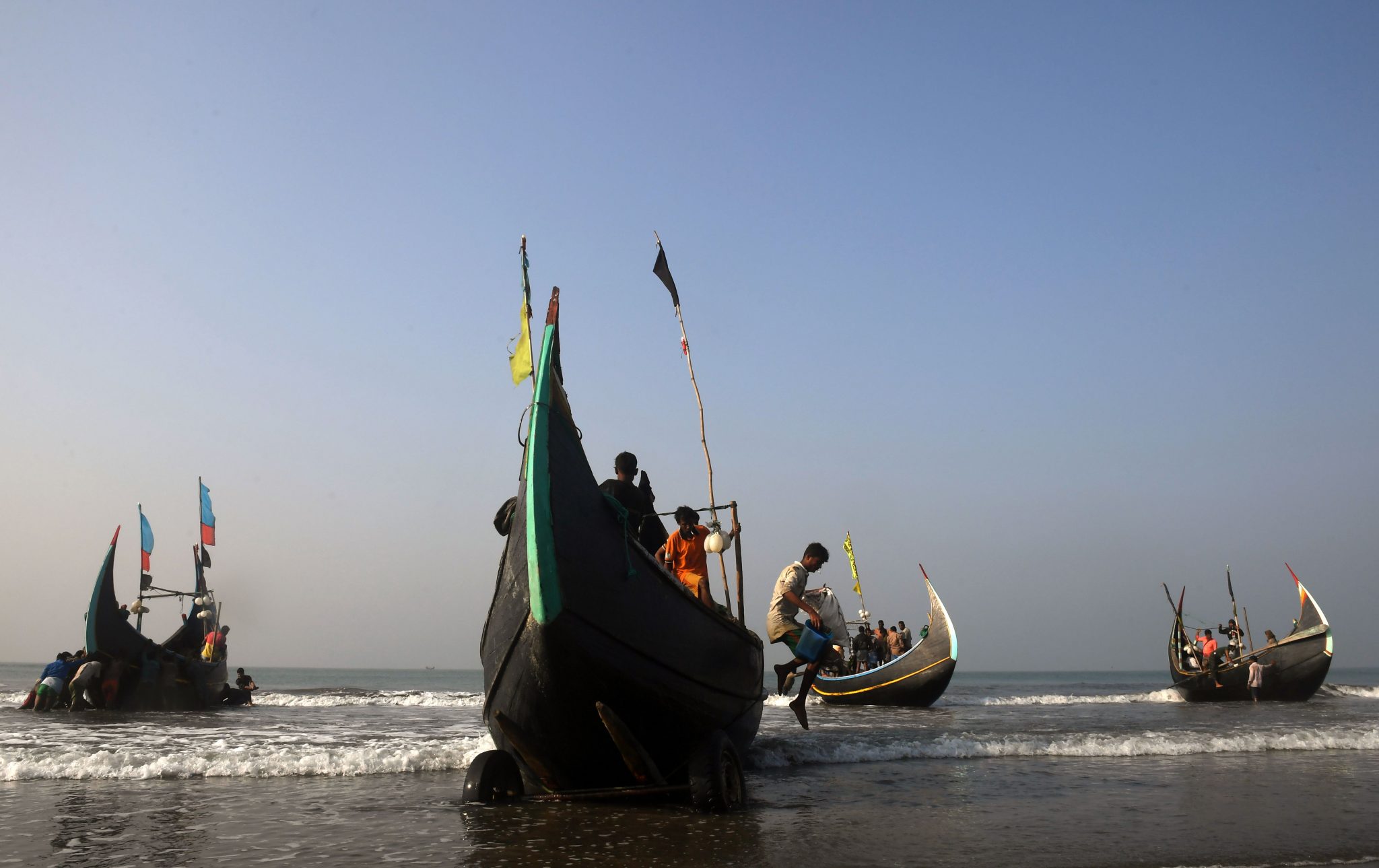 This photo taken on November 17, 2018 shows Bangladeshi fishermen anchoring a fishing boat and unloading their catch with help of young locals at Shamlapur fishing village in the Ukhia area of Bangladesh. (Photo by DIBYANGSHU SARKAR/AFP/Getty Images)

A bul Kalam Maji has been catching fish in the Bay of Bengal for 30 years but an uptick in cyclone warnings, as warming seas bring stronger storms, is making his job much harder.

He and other fishermen in this village in southern Bangladesh‘s delta islands now must stay off the water up to half of the month during the storm season, in response to warnings that fishing could be perilous.

“I never saw such an increased number of cyclone warnings in the past. Now we cannot go to sea for 10 to 15 days every month on average during the summer and monsoon,” the 64-year-old told the Thomson Reuters Foundation.

Fishermen rarely ignore the warnings, he said, as most have first-hand experience with cyclones.

Two years ago, he remembers, while at sea, his crew received a cyclone warning urging them to head to shore.

“But it was too late. Our fishing boat was hit by the cyclone before reaching shore and we were stuck on a small island, 40 kilometres off to the coast,” he said.

Only the next day did they manage to extract their boat and reach home, he said.

Bangladesh, widely seen as one of the countries most vulnerable to climate change, sees cyclones hit its coastal areas almost every year, usually in early summer or the late-year rainy season – and the numbers are rising, meteorological officials say.

The Bangladesh Meteorological Department issued a total of 12 cyclone warnings along Bangladesh’s coast in 2018, according to government data. In each case, fishermen were asked not to go to sea for between two and 15 days.

In total, fishermen were asked to remain on shore for 75 days in 2018, said meteorologist Arif Hossain.

“Except for the first five months of the last year, we issued at least one warning or cautionary signal every month,” the meteorological department worker said.

NO WORK, NO FOOD

The decrease in time spent fishing means many fishing families are now struggling financially, they said.

Apart from the cyclone warnings, the government restricts fishing at sea and in coastal rivers for 22 days each October, to protect Hilsa fish – a herring-like fish that is Bangladesh‘s main national catch – during the peak breeding season.

Abdul Malek, who has fished for 27 years from the village of Kalirchar, said he has seen his income fall dramatically as the number of days he can fish declines.

“As a result, we are failing to meet the educational and healthcare expenditures of our children. We cannot even give them meal three times in a day,” he said.

“Families of many fishermen remain hungry,” he said.

Mahabub Morshed Liton, chairman of the Hatiya sub-district, said when fishermen cannot go to sea as a result of cyclone warnings or other threats, the government distributes ‘fishermen cards’ which fishermen can exchange for free grain.

“But the number of cards is negligible and needs to be increased,” he said.

He said his administration plans to negotiate with higher-level authorities to find ways to provide more support to fishermen during crisis periods.

Mizanur Rahman Bhuiyan, a community development officer for the U.N. Development Programme, said his agency is trying to provide alternative ways for fishermen to earn a living, from growing vegetables to farming fish.

But with so many fishermen struggling, it is hard to find enough alternatives, he said.

Malik Fida A. Khan, the deputy executive director of the Center for Environmental and Geographic Information Services (CEGIS), a Dhaka-based thinktank, said setting up fish farms might be a promising way of providing a supplemental income.

“Inland cage fish cultivation could be introduced in the coastal canals to create alternative livelihoods for fishermen and it would be a good adaptation option,” he said.

Such systems are popular in other countries, including Vietnam, he said.

A ‘friend’s thoughts’ on yoga, spirituality and life

Spotlight on a great master in world cinema

How women have managed periods throughout history

Nicola Walker excels in tender revival of The Corn is Green

The Return of Faraz Ali: Debut novel helps author define her ties with…

Rising star Sunak loses some of his shine