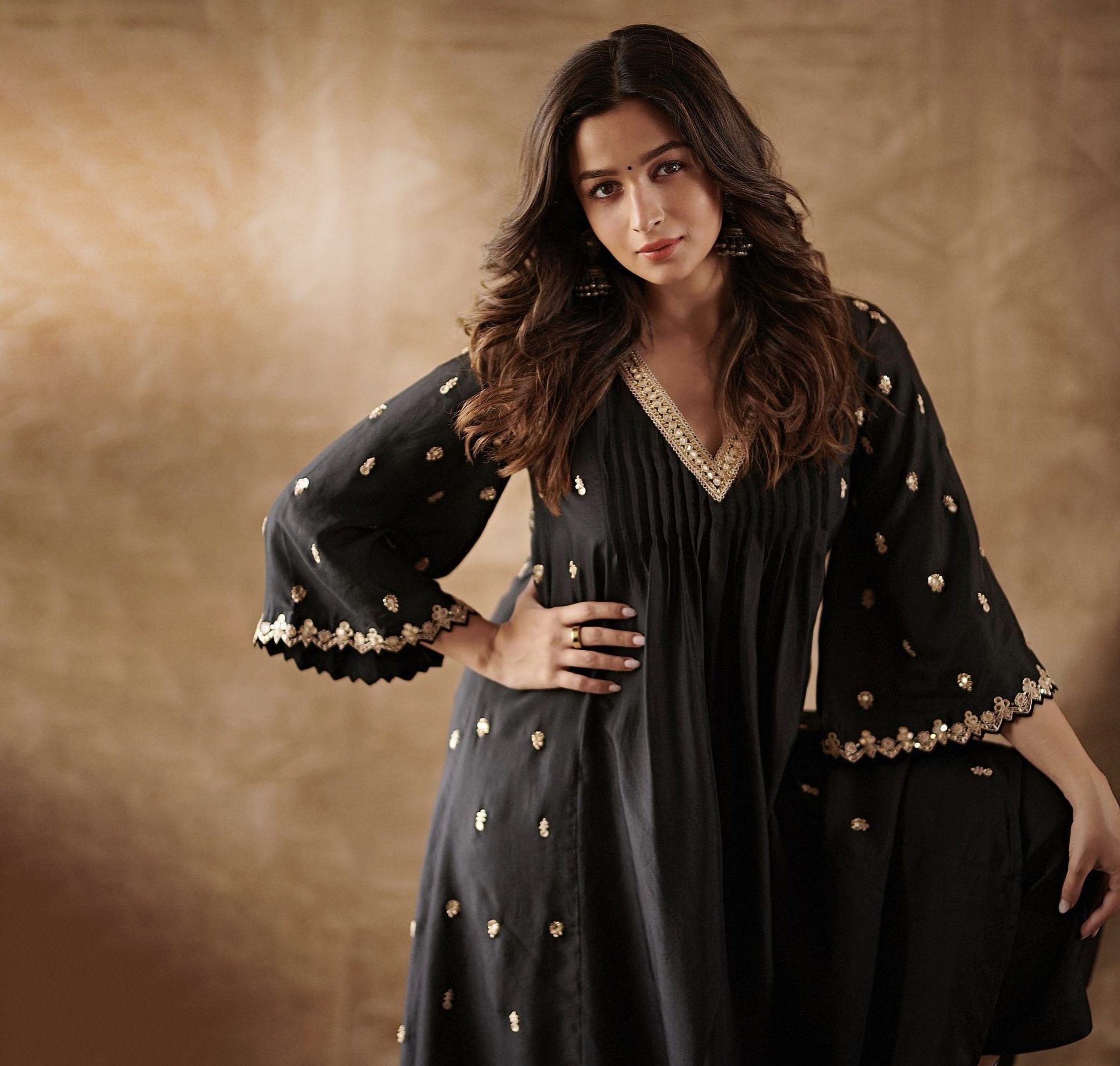 A critically acclaimed role in Gangubai Kathiawadi, a notable guest appearance in record-breaking film RRR, and signing her first Hollywood film have turned 2022
into a great professional year for Alia Bhatt.

The year gets more special this week with new film Darlings. She plays the lead role and marks her debut as a producer with the black comedy-drama, which also stars Shefali Shah and Vijay Varma. Her production Eternal Sunshine has teamed up with Shah Rukh Khan’s Red Chillies Entertainment for the interesting looking film about a mother and daughter, which is available now globally on streaming site Netflix.

Bhatt recently opened up to Eastern Eye about turning producer, partnering with Netflix, choosing characters that are completely different from her true personality, and more. She also spoke about starting from scratch for her upcoming Hollywood debut film Heart of Stone.

Was venturing into production pre-decided and what was the thought behind releasing the film directly on a streaming platform, rather than in theatres?
It was pre-decided. Also, it kind of naturally happened. Darlings is the kind of movie that fits perfectly on an OTT platform. Theatres have a certain larger-than-life scale kind of appeal. Darlings, of course, is larger-than-life, but it is an intimate watch. So, the idea of putting it on Netflix was that you do not really need to step out of your house, the film will come to you.

Exactly when did you decide to become a producer?
Honestly speaking, we had this idea in 2019. I mentioned a bit of it in the press conference also. The idea came pre-pandemic. Post-pandemic, things became a little bit clearer that certain films will sit very well and have a longer shelf life maybe on a platform like Netflix. On day one, your film reaches about 190 countries. So, there is no barrier of language anymore. Cinema is now just beyond language.

Darlings is about domestic violence and it’s a sensitive subject. How easy or difficult it is to present it with a pinch of humour?
That’s the director’s prerogative. When I read the script, my first thought was, ‘oh my God.’ It’s a difficult job for the director. We are not making fun of the matter, that is not happening.

Tell us about the story?
We are giving you these two characters. The story is about mine and Shefali’s characters, Badru and Shamshu. They are a mother-daughter duo and want to fix the daughter’s problem. The way they try and fix the problem is weird and funny, as well as what ends up happening to them in the bargain. The film is all about that. That is the backdrop. That is the message. We know it from day zero that it’s not an acceptable aspect. Any violence is not acceptable. But this is more the story of these characters and then when there is a comedy of errors, they are trying their best to handle the situation and are unable to do that. So, that is where the comedy begins.

When somebody approaches you with a character, do you try to find a little bit of Alia Bhatt in it, or do you love taking on characters totally different from your personality?
I think the second part. In fact, I look totally away from who I am as a person because that’s the only way I will be able to explore different shades and really give you a different look every time. I think one of the things that people say to me, which they enjoy, is always seeing a different character because, at the end of the day, who wants to eat the same kind of food every day? You won’t eat the same curry every single day. If you want a little bit of variety then I also don’t get bored, because I get bored very easily. You last saw me as Gangubai. Badru in Darlings is totally opposite to that of Gangubai.

We have seen so many old videos where you said that you loved Ranbir Kapoor. So, when it comes to your personal life, you have achieved whatever you wished for. What kind of changes have you observed in your life over the past few months?
You cannot plan anything in your life. Whatever you are saying, yes, I must have said that in a star-in-my-eyes sort of situation. I just said it, but I never knew what would happen after five to 10 years. So, I have lived each day not knowing what’s going to happen tomorrow but at times, things that are meant to be, just happen. So, I think that was just meant to be and it just happened. Similarly, like me coming into the movies, I used to always say that I wanted to become an actress since I was four years old. I never imagined I would start acting at the age of 17 and will get my first movie with Dharma Productions, directed by Karan Johar. Who plans all this? No one plans this.

So, it is destiny…
Yes, there are many things that are according to your destiny. I am very grateful for everything, for whatever I have encountered in my life. And if at all anybody asks me after 10 years, what is it that you want to change in your life, I would not like to change anything because all of that has resulted in who I am today.

What kind of stories would you like to tell as a producer?
You can say this is my 10th year in the industry and this too happened naturally. As I said, I signed Darlings in 2019. Due to the pandemic, it is being released in 2022. So, the time has come, and my first production is being released in my 10th year as a producer. That is my dream now, to build my production house. As I said, it is a boutique production house. I am so interested now in the idea of putting together and telling stories. I am not just acting. I will continue to act and that is never going to change, but I am aiding another person’s vision and the kind of stories I want to tell are, of course, the stories that entertain you and definitely the stories that you learn something from.

Tell us more about that…
It has to be somewhere where you watch the film, and you take something back because that’s what I feel. When I watch a good movie, I learn a lesson or there is a scene that just touches my heart and I think about it for days. It stays with you. That’s why you have favourite movies, favourite songs, and all of that. But there is so much for me to learn. I hope to make and produce a movie I am not necessarily acting in, which comes out and does really well. Then that’s my mark really as a good producer because I am really putting together content on a creative basis.

When you release a film theatrically, you have box office numbers, but when it is OTT, there is no definite quantifiable measure as such. So as an actor and producer, is that concerning, or does it release the stress?
No, OTT does have its matrix. It has its own matrix of the number of hours the content was viewed for. So, we did that even after Gangubai Kathiawadi had its run at theatres and then released on Netflix. It went on the top 10 global films list, non-English films, and that was massive. It was number one, it was huge. Even RRR had the same thing. Of course, it matters to know whether the film is a success or not but what matters more is the love. After five years, you are not going to remember numbers, you will be like it was a hit. But why was it a hit? Because the film was good.

So, the focus is making a good film?
Yes, first make a good film, and then you can think about it. If the content is coming on Netflix or in the theatres, what matters most is love. I will receive the love if the film is loved. That’s the best way for you to quantify whether it’s a success or not. A film like Shershaah created so much noise last year. I didn’t feel that difference that it released on OTT. Even Mimi got so much love for Kriti (Sanon). It didn’t make a difference and she got an award for that film. It does not matter beyond a point because love is not measured in numbers.

You are also set to make your Hollywood debut with Netflix movie Heart of Stone. Was that always there on your wish list?
It was on my wish list. In fact, even through lockdown, I was at home doing auditions and self-taping. And I have been putting myself out there actively. I even signed with an agency, WME. I am doing it not because I am done with Bollywood and planning to shift my base there. It’s again a new opportunity. It’s like how you create new challenging opportunities for yourself, where you can again start from scratch. I have worked for 10 years but not necessarily everybody in the world knows who I am and what kind of actor I am.

So, it’s a new challenge…
So, here, I need to prove my might all over again. That’s a new challenge. It’s more exciting. The film is headlined by Gal Gadot. She is outstanding. She is a ‘Wonder Woman’ literally. There is Jamie Dornan. These are the actors who are really loved and respected, and I look up to them. It was a fabulous experience.
Darlings is available now on Netflix