1984 marks one of ‘darkest’ years in modern Indian history: US senator 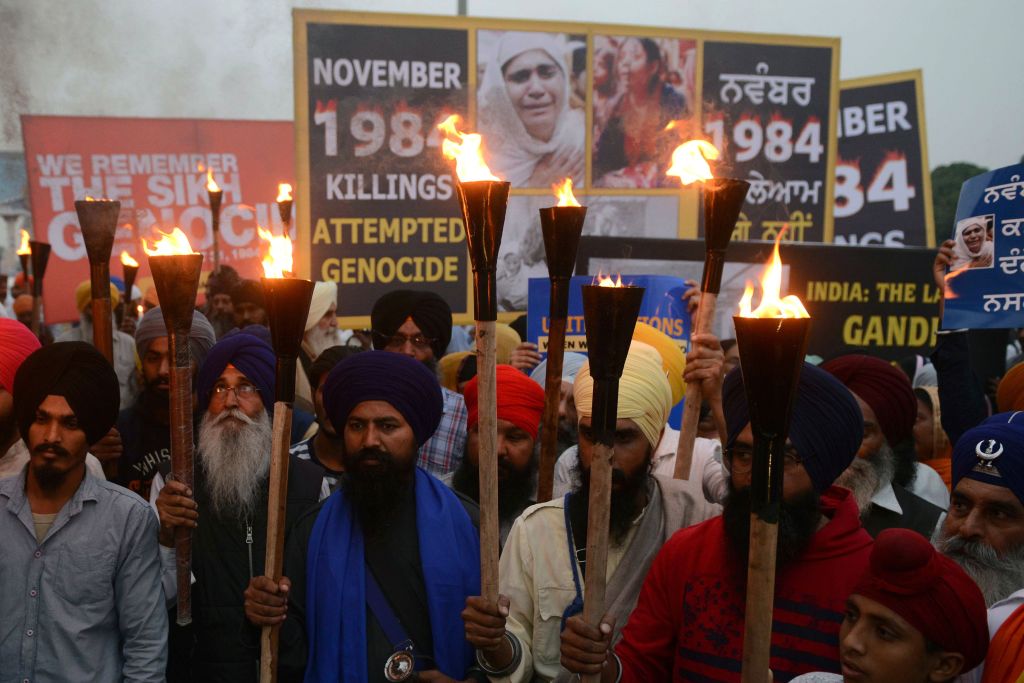 Indian activists of the Dal Khalsa radical Sikh organization march at a protest to commemorate the 1984 anti-Sikh riots in Amritsar on November 3, 2018. – Sikh organizations marked the 34th anniversary of the 1984 anti-Sikh riots that led to the hundreds of deaths in retaliation for the then-Indian prime minister Indira Gandhi’s assassination by her Sikh bodyguards. (Photo by NARINDER NANU / AFP) (Photo credit should read NARINDER NANU/AFP via Getty Images)

The anti-Sikh riots of 1984 marks one of the “darkest” years in modern Indian history, a US senator has said, as underlined the need to remember the atrocities committed against Sikhs so that those responsible may be held accountable.

Violence erupted in Delhi and other parts of the country after former Prime Minister Indira Gandhi was assassinated by her Sikh bodyguards on October 31, 1984. Over 3,000 Sikhs were killed across India, mostly in the national capital.

“1984 marks one of the darkest years in modern Indian history. The world watched as several violent incidents broke out among ethnic groups in India, with several notably targeting the Sikh community,” Senator Pat Toomey said in his speech on the Senate floor.

“Today we are here to remember the tragedy that commenced on November 1, 1984, following decades of ethnic tension between Sikhs in the Punjab province and the central Indian Government,” he said.

As so often in such cases, the official estimates likely do not tell the whole story, but it is estimated that over 30,000 Sikh men, women, and children were deliberately targeted, raped, slaughtered, and displaced by mobs across India, said the senator from Pennsylvania.

“To prevent future human rights abuses, we must recognise their past forms. We must remember the atrocities committed against Sikhs so that those responsible may be held accountable and that this type of tragedy is not repeated against the Sikh community or other communities across the globe,” Toomey said.

Senator Toomey, who is a member of the American Sikh Congressional Caucus, said Sikhism traces its nearly 600-year history to the Punjab region of India. With nearly 30 million followers globally and 700,000 here in the US, Sikhism is one of the world’s major religions.

Historically, Sikhs have showcased a commitment to serving individuals from all religious, cultural, and ethnic backgrounds, demonstrating their generosity and a deep sense of community.

“During the COVID-19 pandemic, Sikh communities across Pennsylvania and the United States came together to deliver groceries, masks, and other supplies to tens of thousands of families in need no matter their race, gender, religion, or creed,” he said.

Toomey said he has personally witnessed the spirit of Sikhs and has come to better understand the Sikh tradition that is founded on equality, respect, and peace.

It is clear that the presence and contributions of Sikh communities have thoroughly enriched their neighbourhoods across the country, he said.

US: Family of Texas entrepreneur fatally shot by police say he wasn’t given enough time…

India is home to a great diversity of faiths: US

Sikh students allowed to wear kirpan on campus of US university

Saudi Crown Prince has given the same protection from prosecution as PM Modi:…

Viral video: US men dress up in sarees and put on bindis to…

Five Indian-Americans headed for US House of Representatives