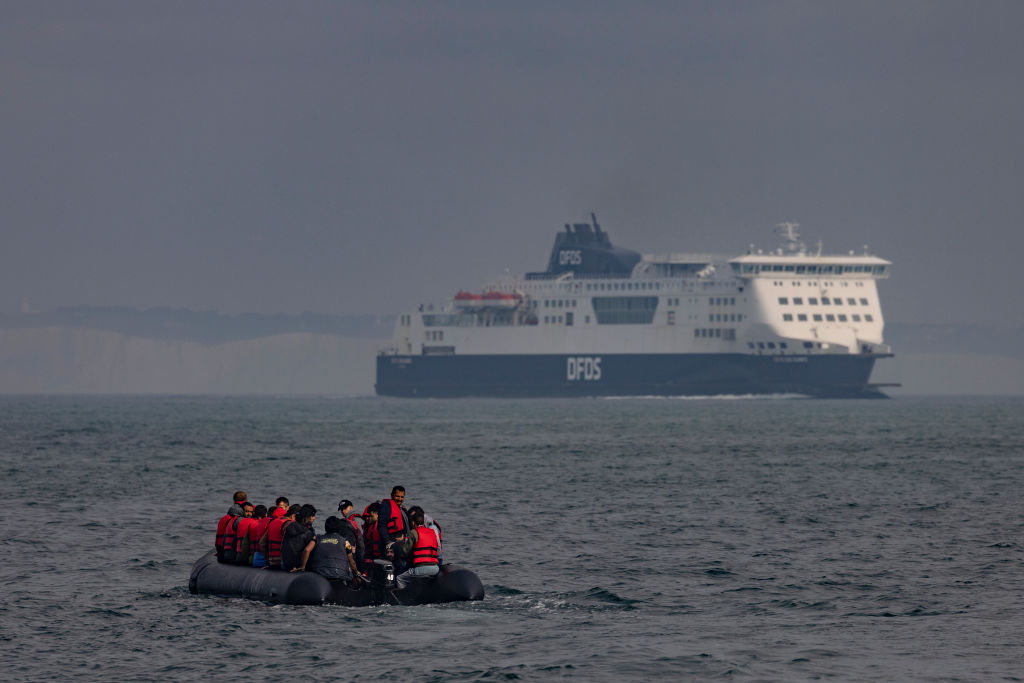 AT SEA, ENGLAND – AUGUST 04: An inflatable craft carrying migrants crosses the shipping lane in the English Channel towards the white cliffs at Dover on August 4, 2022 off the coast of Dover, England. Around 700 migrants crossed the channel from France on Monday, a record for a single day so far this year, bringing the total for 2022 to around 17,000. (Photo by Dan Kitwood/Getty Images)

Britain has intercepted more than 1100 migrants illegally crossing the English Channel, taking the total number of people making such journeys to the UK well past 31,000 so far this year.

According to the Ministry of Defence, 1,150 people travelling in 21 small boats were detected on Thursday. The figure was the third highest for a single day during the year, behind the 1,295 migrants intercepted on August 22 and 1,160 on September 4.

Data showed 31,699 people have reached British shores by the illegal route during the year to date – a figure that exceeded the previous year’s total of 28,526. This compares with 8,410 such crossings in 2020.

Officials erected special tents in Dover to accommodate the new arrivals as the surge in Channel crossings strained the facilities for migrants provided by the government in Kent.

More than 60 migrants were brought ashore by a lifeboat on Wednesday near Lydd in Kent where they were taken to a processing centre.

The influx of migrants via northern France comes in the face of the UK’s plans to send asylum seekers to Rwanda getting stuck in legal hurdles.

The first deportation flight was due to take off on June 14 but it was grounded following intervention by the European human rights court in the eleventh hour.

The plans have been challenged by several asylum seekers, the Public and Commercial Services Union and charities Care4Calais, Detention Action and Asylum Aid.

A government spokesman told the BBC that the continued rise in crossings risking the lives of vulnerable people was “a clear abuse of our immigration laws.

Migrants who illegally entered the UK after travelling through safe countries “will not be allowed to start a new life here,” the spokesperson said.

Security forces have previously said Albanians have accounted for a majority of the migrants illegally crossing the Channel in recent weeks.

Earlier this week, French police busted a major people-smuggling racket involved in sending migrants to Britain in dinghies. Officials said more than a dozen boats and 700 life jackets were seized during a raid in the northern French city of Lille.